You For Me For You Reviews 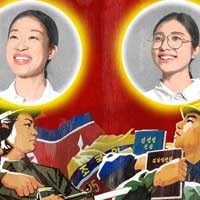 You For Me For You

"...I admired Chungs script on the page when I read it two years ago, but this Chicago premiere hits on nearly all the cylinders, both enlarging Chungs linguistically rich dialogue and finding moments of spare poignancy. You for Me for You doesnt take a docu-drama approach to illustrating the dangers of defection. Instead, the story of sisters Minhee (Helen Joo Lee) and Junhee (Jin Park) takes place in two equally strange and befuddling universes."

"...Mia Chungs grim dark comedy about two sisters struggling to escape the brutal dictatorship in North Korea, was first produced back in 2012 at Washington, DCs Woolly Mammoth Theater, but it could easily have been ripped from todays headlines, so fresh and compelling is Sideshow Theatre Companys revival under the direction of Elly Green."

"...Early on, the play is disconcerting as Chung jerks the audience into the magical style after an almost brutally-realistic opening scene between the sisters. You'll need to pay attention and figure out the rules of the road, which are fable-like and picaresque. Once you do, the play's simple but diverse theatrical devices are highly engaging. The fine supporting cast includes Patrick Agada ( charming as Junhee's boyfriend ), Gordon Chow, funny Katy Carolina Collins and John Lu."

"...You for Me for You is a thought-provoking paean to the power of sisterly love. Its also downright scary, in a Im so glad I dont live in North Korea kind of way. With North Korea in the news a lot lately, the Sideshow production is very well-timed. Coincidentally, the press opening was the same night that the White House announced that President Trump and Kim Jong Un would meet."

"...Chung's play is like a mural constructed out of sharps of colored glass, dazzling from a distance, a triumph of vision when viewed up close. It squares with Sideshow's outsider vision of the theatrical arts; they are a company that gives the impression of succeeding in their overall mission even while individual productions vary in quality. "You for Me for You" is worth your time and effort, in part for the specificity of its political relevance, but more so for the empathetic possibilities of its means."

"...This unusual story of self-sacrifice, of sibling love and sister loyalty, is really a tale of assimilation. Mia Chungs fantasy isnt just about North Korea. Its a story of adventure, about starting over again and making the best of a new situation. Theres much to admire in the way Ms. Chung has painted these two strong female characters who live for each other, yet go on to create their own, individual scenarios. This production, told in episodes and installments, is a dazzling fantasy for smart theatergoers to admire and enjoy."

"...You for Me for You is a play that can tear at your heart and also remind you of current politics. (From which there is no escape.) Coincidentally, the presidents decision to meet with the North Korean leader came just as we were watching Mia Chungs play about two North Korean sisters separated by politics."

"...You For Me For You, a Sideshow Theatre production now playing at Victory Gardens, is a brilliantly written, thoroughly original, and provocative piece of theatre. In its imaginative way, it takes us on two journeys simultaneously: an immigrants saga of integration in the US and a fantastical glimpse at the horrors of everyday life in the most secretive country in the world, North Korea. Both journeys play out in unexpected and, often, surprisingly funny ways."

"...The staging by director Elly Green is masterful. The journey she takes us on is not easy, but it is necessary, particularly with today's political climate. It is all too easy, as Americans, to see North Koreans as a monolith. This important work will smash that mistaken notion."