Together At Last Reviews 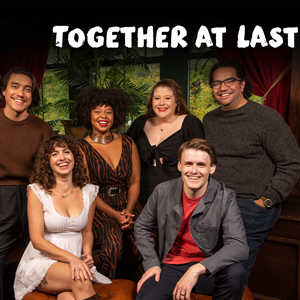 "...Happily, this cast does have a zany side and, at times, they let it loose. Martin is sometimes able to improvise with an infectious freedom, almost mouthing the words before she knows what they will be, which always serves you well at Second City. Better yet, she nows how to dance on that knife edge where the audience never quite knows the object of the satire."

"...Now the company comes back with a show of new material, shaped over the last few months, and its far from a game-changer. Aside from a few tweaks, its typical 21st century Second City: sketches and blackouts performed with high energy, frenetic pacing and flashy lighting. And the cast arrives almost intact from Do You Believe in Madness?, the 2019-20 show cut short by COVID-19."

"...The revue material is the traditional mix of dialogue, music and improvisation offered in performing units ranging from solos to full ensemble. The jokes touch on everything from TikTok to vaccines and the domestic dynamics of working at home during the shutdown. And being Second City, the state of the state of society is viewed through undisguised liberal eyes."

"...We were impressed by the talent, energy and enthusiasm of the cast. The audience was responsive and everyone seemed very happy to be "Together At Last". Having a reason to laugh and laugh with others felt very good. This was a long -awaited moment. This very talented group of performers frequently seemed to be enjoying the humor as much as the audience which was very endearing."

"...It felt great! That is what it felt like to be back in "Old Town" where comedy is second nature. Yes, we were back at Second City ( after roughly 18 months of very little laughter) for their 109th staged original revue. "Together at last" is the title and as usual, it is written by the funny cast members and directed by Anneliese Toft with music by Jeff Bouthiette. It has been 707 days since their last main stage production opened. That is a VERY long time."

"...With all that weight on their shoulders, the company's 109th revue gets off to an inauspicious start with too many obvious jokes related to the pandemic and an uncomfortably unfunny airflight framing device that seems to be abandoned, thankfully, in the second act. It's almost as if director Anneliese Toft got the cast together at intermission and killed it."

"...Directed with wit, flash and flare by the companys Creative Director, Anneliese Toft, with seamless Musical Direction by Jeff Bouthiette, the cast brings everything theyve got to the stage. Witty, sharp and able to turn on a dime, this group of six improv performers are as likable a cast as youd ever hope to find. The shows written (except for the many moments of on-the-spot improvisation) and performed by Mary Catherine Curran, Sarah DellAmico, Asia Martin, Jordan Savusa, Adam Schreck and Evan Mills. Each actor gets an opportunity to shine in the spotlight, usually in tandem with one or more of their scene partners."

"...Together at Last catches the mania produced by the pandemic. In one sketch, a woman clutches a baby with ferocious protectiveness as she runs a man through a rigorous Covid check, challenging the authenticity of his vaccination card and forcing him to jam a testing swab extra far up his nostril. When finally convinced that he is infection-free, she reluctantly allows him to hold the baby  his newborn granddaughter."