The Lost Boys of Sudan Reviews 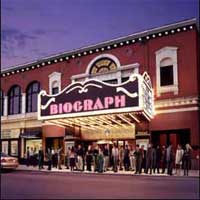 The Lost Boys of Sudan

"...This play was first seen in an earlier form at the Children's Theatre of Minneapolis and it remains, I think, a fabulous show for older kids and teenagers. If you've got difficult members of those particular tribes at home, it might help them appreciate how lucky there are not to have to worry about someone sending them back, wherever back may be."

"...Carter also has a special gift for suggesting cultural fragmentation, disorientation and synthesis. And in Jim Corti's superbly "choreographed" world premiere production, a bravura, ever-morphing cast of eight actors easily makes the impossibly complicated psychological odyssey from rural, war-ravaged Sudan to all-American Fargo, N.D., (where many of the "lost boys" were resettled) come to life. It is an impressive, beautifully evocative journey on every level."

"...Director Jim Corti manages to suggest all of this on a bare set, using only some projections, a drum, brisk pacing, choreographed movement, and versatile ensemble work from a cast of eight who create the illusion of much greater numbers by seamlessly slipping into multiple roles. Corti's no-fuss approach allows Carter's verbal pyrotechnics to provide the majority of the play's effects. Employing a heightened poetic language that includes chanting, rhymed couplets, and evocative wordplay, Carter evokes both the elemental gravity and the bizarre unreality of the events he describes."

"...as a play for young audiences and adults dealing with such a difficult humanitarian crisis, Carter artfully succeeds with his sharp, poetic script. The Lost Boys of Sudan also benefits enormously in director Jim Corti's vivid and fluid staging atop James Dardenne's spare scenery and beautifully rendered projections. Elements of African folklore (Nambi E. Kelley as the ethereally narrating cow spirit Ayoun) give way to the stylized depictions of the horrific atrocities in Sudan."

"...        As the play now stands (and apparently its been in a state of revision since 2007), the narrative meanders badly, adopting an almost frivolous tone for a serious topic. The plays language veers without reason from realistic prose to doggerel verse and even passages from Shakespeare."

"... The kids adjustment to American life is sketched all too lightly, and Fargo characters pull too much focusas when Kenn E. Head literally stops the show with a slam-poet assessment of the current American political landscape thats wholly out of place in this play. And it seems more than odd that, although Fargo was more than 94-percent white in the 2000 census, our Sudanese settlers interact only with African-Americans or African immigrants. Despite some truly fine work by a talented cast, Lost Boys feels rife with lost opportunities."

"...The Lost Boys of Sudan tries to be a hip-hop show and a teen survival saga; the accented, rhyming speech patterns give the show a dream-like quality that deludes the truth of the teens struggle. I was disturbed by the style of this play finding it tasteless. Lovers of hip-hop theater will enjoy this troubling work more than I did. Lonnie Carter has been described as a word dazzle and language-drunk playwright. His style is lost on me. Carter fan will cherish this work."

"...The three teens are played with great zest and energy by Samuel G. Roberson Junior (who has most of the comic lines), the lovely Leslie Ann Sheppard (who, despite her womanly figure pulls off the early passage for a boy) and Namir Smallwood, a newcomer to Chicago, but a name you will be seeing quite a bit of.  Corti's direction on a simple set by James Dardenne, who also designed some wonderful projections, is unique.  He proves that less is better by using very little in the way of furniture and set pieces, relying on the talent of his actors and the story itself to paint the picture that the audience gets to see.  Rita Pietraszek's lighting and the sound by Andre Pluess along with the costumes by Elizabeth Flauto make the recipe complete."

"...The efforts of director Jim Corti and his talented ensemble balance out the flaws of the writing, creating a final product that is technically impressive and incredibly polished. All of the actors have a great handle on the difficult African dialects, and as maligned as the verse may be, the entire ensemble approached the language with confidence. Narrator Ayoun (Nambi E. Kelley) does a great job connecting with the audience, delicately controlling the scripts wordplay and adding depth to the occasionally purple prose."