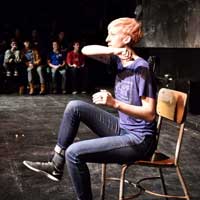 "...Much like this makeshift forest grew almost imperceptibly, so too did the connection to the performers on stage. As each performer offered a bit of themselves, their lives, and their truth with each passing short play, they managed to revitalize a connection between audience and artist that has been missing this past year and a half. While it's only a glimpse into their lives through their art, "The Infinite Wrench" offers a level of intimacy that can only be obtained when artist and audience are finally able to lock eyes in the same space again."

"...The Infinite Wrench is the successor to the long-running Too Much Light Makes the Baby Go Blind, and it continues that hit show's format: the talented cast performs up to thirty playlets in an hour, in a sequence chosen by the audience. When the timer runs out, so does the show. Plays range from silly and funny scenes to dramatic monologues to plays partially improvised in front of you to outrageous visual humor to elaborate gimmicks to social commentary to...I could go on, but the idea is that there is no single idea governing these short plays, all of which were written by Neo-Futurist cast members themselves."

"...The Neo-Futurists have not disappointed with their new take on their old classic. They are as punchy and thought-provoking as ever. Old fans and new faces will enjoy THE INFINITE WRENCH (hopefully) for years to come."