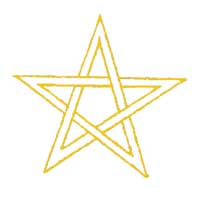 "...As medieval pastiche, John C. Ashtons show for Pearl Poet Productions takes itself too seriously. As a rock musical, its embarrassing. But as both together, its the weirdest thing on wheels."

"...The biggest problem with this production, besides John C. Ashton's choppy script, is the direction. First, director Nich Radcliffe is saddled with a space that's too wide for this story, and he doesn't use the playing area to its fullest advantage. The play itself might've been better had he infused his actors with more energy. With the inclusion of so many annoying hard rock songs, which destroy the flow and add nothing to the story, this piece might've been more entertaining if it was played as a comedy. Certainly the anachronistic quality that Radcliffe was trying to achieve would lend itself to satire or some broad humor. As it stands now, this is simply a long, disappointing, but chivalric, first attempt by an admirable new theatre company who deserve a better second chance with their mission."

"...With an approach that embraces anachronism instead of holding it at arms length and aims for reinvigorating instead of just reiterating the poem, theres no reason this couldnt work, idiosyncratic soundtrack and all. As it stands, though, theres simply not enough here to recommend it over picking up Marie Borroffs seminal translation of the original from your nearest bookseller and spending an evening reading that with whatever background music suits your fancy."

Chicago On Stage- Not Recommended

"...Do yourself a huge favor: find out what the talented members of this cast will be in next and see them in that. Make it a point. They are owed the audience after wallowing in this mess for the last month or so. And youll enjoy that a lot more than coming to see Sir Gawain and the Green Knight. But if you have to come to the Raven Theatre Complex this month, Id suggest seeing A Klingon Christmas Carol. I havent seen it, but the folks in that theatre sounded like they were having a lot of fun."

"...The greatest draw of Sir Gawain and the Green Knight, in this authors opinion, stems from the powerful original rock music. Every actor brings beautifully unique singing talent to the stage, and the songs themselves are enjoyable, deep, and exciting."