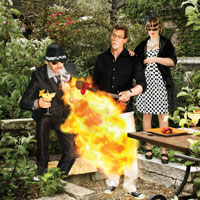 "...For there can be no question that Lookingglass, in partnership with the High Priest of Mexican cuisine, does indeed deliver a very sexy and sensual experience with "Cascabel, " a high-end ($200-$250) dinner-and-show attraction that's as far away from any beef and boards -- or hand-held Medieval chicken dinners -- as Tibet is from Tijuana. If this show -- which features a loose, brief story that makes plenty of room for beautiful bodies twisting themselves into intimate circus acts, as well as the on-stage cooking of the celebrity chef himself -- were in Las Vegas, it would fall into an established aesthetic and have some competition. But there's nothing even remotely like it in Chicago: if raw demand were the only determinant of a show's future at a non-profit entity, it's hard to see why Lookingglass would ever need to close this one down. Too many people were having too good a time."

"...For decades now, restaurants have been the primary form of theater enjoyed by most people. But with Cascabel, the elaborate hybrid of high-end food, dazzling circus acts, mostly comic storytelling, and superb music and dance, Lookingglass Theatre has devised a whole new form of entertainment that might well be dubbed the full immersion sensory experience. And just as New Yorks Public Theatre once was able to bankroll itself on royalties from A Chorus Line, Lookingglass might find Cascabel to be its ticket to a golden nest egg."

"...And then there's Bayless. The food mogul best known for his Frontera Grill is at once Cascabel's greatest asset and its weakest link. On the one hand, his involvement is clearly the show's primary selling point, his food is exquisite (even my beef-eschewing wife loved the tenderloin), and his gamenesshis sheer willingness to playis inspiring. On the other, he's ultimately a distraction, pulling focus because of his fame but lacking the chops to do much with our attention when he's got itan especially glaring problem when you consider the prodigies with whom he's surrounded. The central conceit of the show, that the cook he plays produces magical food, comes across as sycophancy: a tribute to the great man. Overall, he seems like a guy who won his role by putting in the highest bid at a silent auction."

"... "Ive been to dinner. Ive been to theater. Ive been to dinner theater, cirque theater, no-fork medieval theater, Julia Child-learns-to-scramble-an-egg theater. But I have to admit, I have never been to a theater where my wine was poured by an aerial waiter who managed both bottle and glass while dangling upside down from above. Thats just a hint of the fun the crowd is having."

"...The staging, under Heidi Stillmans lead directing, is a model of efficiency. The dialogue and the circus acts and the food service flow without a glitch. The plot never elevates itself above the silly and the improbable, but nobody cared. The cumulative effect creates an evening of unbroken pleasure. The audience recognized it was participating in one of the most distinctive events in recent Chicagoland entertainment history and it had a ball."

"...This show is about having fun! Keeping it light, Jesse Perez facilitates as the wise-cracking MaitreD. Hanging from the chandeliers, the adorable Lindsay Noel Whiting is marveling pouring wine upside-down. But the show-stopping buffoonery belongs to Anne Goldmann and Jonathan Taylor. Its bananas and its fricking hilarious! They go back and forth spitting banana chunks into each others mouth. I was laughing so hard that I cried off my mascara. Im delighted to read post-show that Goldmann and Taylor are married in real-life. Somehow, their gross antics seem a little more acceptable as a wedded pair."