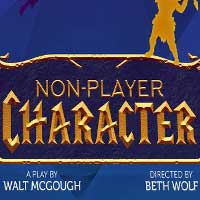 "...Throughout, it's always clear whose thoughts and actions deserve finger snaps and whose should be instantly condemned. McGough ends up with a staged opinion piece short on nuance and long on repetitive dialogue. Director Beth Wolf has assembled a strong cast, with careful, passionate performances from Alice Wu as Katja and Matthew Schnitker as Trent. But McGough doesn't offer much beyond entry-level critiques of toxic male privilege and gender bias with a pinch of modest female self-empowerment. Like many contemporary playwrights, McGough seems more interested in reassuring his audience that they're right-thinking progressives than in challenging any of their assumptions."

"...A narrative dynamic occurring predominantly on a computer screen makes for a stage picture in constant motion, whether depicting a tree assembled from flat-shape collages, a swashbuckling sword-and-sorcery skirmish with stick-puppet icons, or a swarm of angry posters descending on their prey like wolves taking down a deer. Director Beth Wolf and an ensemble of actors and technicians ( in particular, projection designers Aaron Sawyer, Clare Brennan and Beth Wolf, and fight/movement choreographers Chris Smith and Maureen Yasko ) ensure that every second of the 90 minutes needed for McGough to deliver his lesson on the scourge of cyberbullying remains coherent and comprehensible to audiences of all ages, both net-fluent and gaming-illiterate."

"...Non-Player Character is a charming show that stumbles when you look past the material and into more substantial questions about purpose."

"...Red Theater's latest offering brings the culture of live video gaming to theatre audiences. Much like other plays, such as "She Kills Monsters" and "Theatre of the Arcade," which offers a mash-up of five classic video games adapted for the stage, theatergoers who revel in playing electronic fantasy games will love Walt McGough's play. The production is imaginatively staged by guest director, who brings the action to within just a few feet of her audience. She's guided her splendid ensemble to perfection. She may even have inspired a few patrons, who've never indulged in this form of entertainment, to give it a go in the world of fantasy role playing. Just beware of those man-eating pumpkins!"

"...Walt McGoughs dramatic treatment of #Gamergate is a worthy primer on that particular flavor of toxic masculinity. And in Beth Wolfs staging for Red Theater, its packed with clever touches for the video-game astute. Unfortunately, McGough isnt able to bring this narrative to a satisfying conclusionbut then again, we as a society havent managed that, either."