How to Get the Best Seats for "Wicked" in Chicago

Wicked will be flying back to Chicago this fall as it returns for an extended engagement. The Nederlander Theatre will host the beloved Tony and Grammy Award winning musical for this extended run from September 28 through December 4, 2022. Use our guide and seating chart below to make sure you get the best tickets for Wicked in Chicago.

The Nederlander Theatre, which was formerly known as the Oriental Theatre, is where Wicked originally played starting back in June 2005 for an extremely successful three and a half year run. The final show of this original run was on January 25, 2009 after the show's 1,500th performance. The popularity of Chicago theaters as tourist destinations was strongly helped by that production of Wicked. Families from all over the Midwest and across the globe came to see it. During this initial run, Wicked ran eight days a week and it was the longest-running Broadway musical in Chicago and made approximately $210 million. The Chicago-based musical was seen by more than 3,000,000 people, including 20 countries and all 50 states during this initial run.

Touring productions of Wicked of course have been back to Chicago after this initial run but this will be the first time it is back since it was last in Chicago during the 2017-18 holiday season.

Wicked begins prior to Dorothy and her yellow-brick road companions. Instead, Wicked tells the tale of Glinda the Good Witch and the Wicked Witch of the West, and how they became the characters we know from "The Wizard of Oz." Both friendship and betrayal have been a part of the history between these two witches. Elphaba, the wicked witch, was born with green skin. People were afraid of her appearance and unfairly called her wickedness. Glinda, on the other side, is conventionally beautiful so people love her regardless of her insensitivity or shallowness. Wicked addresses the deception of appearances and the value of loyalty. It also asks the question: "What does it mean to be wicked?"

Wicked will take your breath away no matter where you sit. However, if you want to make sure you get some great seats then use the following tips and seating chart as a guide when purchasing your Wicked tickets in Chicago to ensure you get the best seats possible at the Nederlander Theatre. 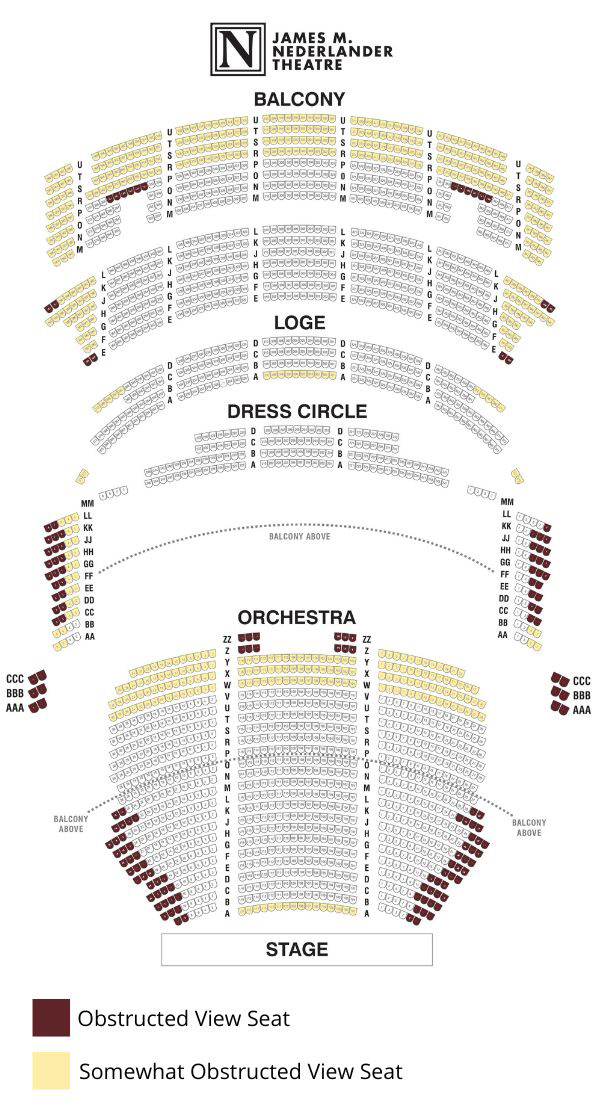 The Orchestra seating at the Nederlander Theatre is the ground floor seating directly in front of the stage and is eye level with the stage. The seats slant downward from row ZZ to row A. The Orchestra is divided into three seated sections: left, right, and center with 25 rows in the center section and 23 rows in the left and right section.

Like most theatres, many of the best seats at the Nederlander Theatre will be found in the center orchestra seats. Please note on the seating chart image that the the seats marked with a dark red on the far left and right side are considered obstructive view seats since you may not be able to see part of the stage from those seats. Also, although row A sounds like it would be great, many have complained that since the stage is so high it is actually hard to see everything from those seats.

The Dress Circle seating is one level up from the Orchestra seating. The seats more in the center tend to be good but the ones on the far left and right do have obstructive views.

Most seats in the Loge section, which is one section above the Dress Circle, tend to be good but we have heard several complaints about the railing in front of row A blocking views somewhat especially in the center seats or for the shorter audience members.

The Balcony is the final level up from the ground seating. Like other sections, the corner seats tend to be obstructed and if you look at the seating image there are also a few sporadic seats that have obstructions as well.

No matter where you end up sitting at the Nederlander Theatre, the highly recommended and hugely popular Wicked will still take your breath away. So even if you can't grab the premier seats be assured that you will have a great time seeing Wicked in Chicago.

To get more information on Wicked in Chicago or to purchase tickets, please visit our Wicked show details page.