All The 1BR's A Stage: Do-It-Yourself Tech Design in the Age of Theater-From-Home

Was it really less than a year ago that "a night at the theater" became an evening hunkered down at our desks watching dimly-lit, fuzzily-recorded archival videos on our laptops like ham-radio fugitives in science-fiction dystopiads? And later, after these home-movies gave way to newly-crafted scripts, did we then struggle to accustom ourselves to such visual quirks as the "Kilroy headshot" (that peeking-over-the-window-sill portrait-view resulting from the propensity of Zoomers to look down at their screens, instead of up at the webcam apertures).

This is 2021, however. Actors have become adept at swapping frame-to-frame smooches, throwing winks at unseen conspirators and generating high-wattage eye-contact with scene partners in different time zones. The Metropolis Performing Arts Centre's production of Baskerville even featured bona fide chases and fisticuffs, choreographed by R & D Violence Designers to be filmed in separate sessions and then spliced together by the videographer. To be sure, the feisty granny in About Face's Black Woman On Purpose may lament, "Oooh, that old camera makes me look like I'm getting ready to FIGHT somebody!" but there's no ignoring the improvements in performance techniques arising inevitably from sheer necessity.

Inanimate stage accoutrements are not as pliable, though. Critics questioning the anachronism of electrical switch-plates (albeit sporting faux pearl push-button covers) dotting the walls of the 1901-vintage parlor supplying ambience for Remy Bumppo's holiday revival of Charles Dickens' The Chimes were sharply rebuffed by solo actor/adapter/videographer Nick Sandys, "If one crew member had stepped inside my so-called 'box set' the union would have sent in a whole Health and HVAC team."

Luckily, theater artists possess an innate pack-rat instinct for collecting art trouvé, sometimes for sentimental purposes, but more often on the chance that such unlikely treasures may someday prove useful.

"I have a shoebox full of eyeglasses" admits Tony Dobrolowski—costume accessories often employed for facilitating changes in character, but with the rise of teleconferencing, worn without lenses as a remedy for the "space-alien effect" generated by screen-glare reflection. (Tina Fey is rumored to employ this trick.) 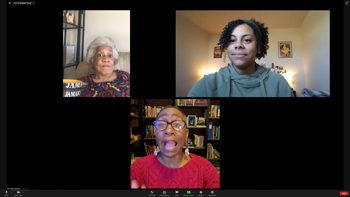 Artists are also known for saving vessels of various sizes and shapes, partly to lend decorative panache to their own quarters, but also called into play as props when needed. Michael Turrentine's scenario for the aforementioned Black Woman On Purpose proposed ladies of three generations—played by Renee Lockett, Shariba Rivers and Anna Dauzvardis—sipping scotch whiskey as they share an evening zoom-chat, but onscreen, only Rivers was seen pouring. "The actors were filming from their individual homes" recalls Turrentine, "so the props were supposed to be just things that they had in their living spaces. It was such a surprise when she [Rivers] said that she had an actual Johnny Walker bottle." (In reality, Rivers was drinking Kombucha, while Lockett and Dauzvardis were swilling iced tea)

Sometimes, though, the play will require a very specific object. Take the title statuary of The Glass Menagerie—in particular, the tiny fragile unicorn whose inadvertent injury is fraught with symbolism. When the Ubiquitous Players decided to include the Tennessee Williams classic in their online play-reading series, they were forced to grapple with a barren wasteland of temporarily-shuttered Home Decor shops. In the end, they relied on cognitive trickery, projecting slide images of the delicate figurines as their scenic background, while "Laura Wingfield" lovingly cradled a painted-stone bear.

More challenging were the difficulties faced by Lifeline Theatre in recreating the universe of Jane Austen's Pride and Prejudice, set amid the rural gentry of England circa 1813. In reimagining Christina Calvert's script for an ensemble transmitting their performances online while scattered over the continent, the company opted to reject realism altogether, instead embracing the dissonance arising from working at home during a shutdown by leaving the text unchanged, but utilizing modern items to tell the story.

Costumes were thus selected from actors' own wardrobes (with the exception of specially-purchased tiaras for formal occasions) and a social-climbing bumpkin conducted us on a tour of a country house luxuriously furnished in heirloom Ikea. Arriving carriages were announced by the offstage sound of car engines, letters read from smartphone texts and meals consumed with plasticware, coffee cups and travel mugs.

"We're used to production managers walking over to adjust body mics, crooked hemlines or whatever else may be going wrong" recalls director Dorothy Milne, "but in these circumstances, they had to talk us through fixing things ourselves."

Especially clever was the staging of ballroom scenes. The 38-year-old company boasts a number of real-life married couples, allowing for some dance partners to be photographed in physical proximity, albeit with faces just slightly hidden from view outside the frame. "Our cast appeared much bigger," Milne chuckles, "since the 'party guests' in the background doubled as other characters in the story. I promised [the actors] that if it looked ridiculous, we'd cut it, but every time I saw it, I laughed, so it stayed."

Sometimes acknowledging the incongruity can exacerbate the humor, says Oak Park Festival Theatre's Jack Hickey, citing a scene from Tom Stoppard's 15-Minute Hamlet where a character hands a glass goblet to another, only to have it magically transformed in the next frame to a water bottle. "Eavesdropping" between frames also makes for reliable comic business.

No matter how varied the stories, however, they all end with a shrug and an exhortation aimed at viewers to "suspend your disbelief." From the earliest days of Greek and Roman theater, audience's imaginations have proven the most reliable factor for enjoyment of performing arts, surpassing even the divine intervention of Olympian gods and muses.

Fillet of Solo Festival, Lifeline Theatre, streaming to March 7. The Rogers Park institution's annual celebration of single-voice show has extended for Theater Week because there was just too much to fit into the scheduled run-Rose Abdoo, Connie Shirakawa, Jim Carrane, Stir-Friday Night, the legendary Sweat Girls and many, many more. Details at www.lifelinetheatre.com

Black Woman on Purpose, About Face Theatre, streaming to "the end of summer." Michael Turrentine's intimate mini-drama about the intergenerational response to a young woman's coming out after a break-up is just one of the entries in About Face's KICKBACK play series. Details at www.aboutfacetheatre.com/kickback

Nat Turner in Jerusalem, Oak Park Festival Theatre, streaming one-night-only on March 27. That's Jerusalem, Virginia, in a jail cell where the leader of the 1831 slave insurrection awaits the morning of his execution in Nathan Allan Davis solo play. Details at www.oakparkfestival.com

Mr. Rogers American Terminator, by William Missouri Downs, zooming March 6, and Why Good Things Happen to Bad People, by Hope Hommersand, zooming March 13, in readings by The Ubiquitous Players. In the first play, the beloved children's TV host takes on social media and in the seccond, sparks fly when a witchcrafting chef and a minister in crisis share a vacation cottage. Details at ubiquitousplayers@gmail.com