Looking Forward To A New Year: Online Play Festivals Usher In an Optimistic 2021

While the impact of such innovations as headshot acting, long-distance repartee and crowd-sourced musicals remains to be seen, theater historians have been chronicling the progress of necessity-bred inventions sparked in response to the lingering closures of playhouses and isolation of its inhabitants. Among these is the adoption of technology borrowed from radio, film and television—know-how rendering productions once viewed in Chicago storefronts accessible to audiences in faraway cities, states and even countries.

Lifeline Theatre's Fillet of Solo festival initially focused on storytellers within a 150-mile radius of Rogers Park, says artistic director Dorothy Milne, but virtual format "allows us to feature stories by former Chicagoans now living in, say, Los Angeles." Elise Marie Davis, artistic director of Broken Nose Theatre, likewise attests to its writers all having roots in Chicago, "even if some don't actually live within the city limits", while David Zak, speaking for PrideArts' Winter Zoom Series, notes that Sophia Zinger, a co-author of the lesbian romcom Shut Up and Kiss Me is a student at Millikin University in downstate Illinois. The producing team for Victory Gardens' New Plays for a New Year further highlights the possibility of new artistic partnerships, with playwrights and directors no longer confronting the necessity of commuting to a shared rehearsal space.

The challenges presented by small screens and close-up viewing has even affected the composition of the plays themselves. Though the selections for Broken Nose's 2021 Bechdel Festival were submitted pre-Shutdown, Davis has noticed playwrights "utilizing smaller casts, making for more intimate settings than, say, a virtual group scene necessitating nine different video frames." Pegasus Theatre's executive producing director Ilesa Duncan also observes that the plays submitted to this year's Young Playwrights competition "all involved a mystery—whether discovered, unearthed or realized."

The scramble to acquire new skills was less difficult for Theatre In the Dark, whose specialty, from its very beginnings, has been all-audio drama crafted to be played in total blackout, but the switch to connection via wireless transmission still mandated considerable adaptation, admits co-founder Corey Bradberry, "Performing live on video-conferencing over 5500 miles to audiences across the globe, we are very literally bound by our bandwidth." Andrew Pond of Eclectic Full Contact Theatre, another company broadcasting all-audio material during the Big Stage Freeze, concurs, "Some of our actors have home studios, some only headphones and built-in mics—this is something we have to adjust for when recording live, but still remote."

The first stream/zoom experiments were noteworthy in their concessions to spectators unable to apply on-demand TV savvy to live-theater expectations (remember the video footage of Jeremy Wechsler "escorting" audiences through the Theater Wit lobby to their seats for Teenage Dick?) but now that even previously computer-illiterate rookies speak fluent William Gibson, a few silver linings appear glimmering on the fringes of lingering clouds obscuring the bright lights.

"Language-focused scripts can be more effectively presented on Zoom than scripts relying more heavily on movement," Zak asserts, "Zoom also delivers the immediacy of in-person performance, as well as a sense of 'occasion' found in going out to attend an event. You can even have real-time post-performance talkbacks to provide a sense of community."

Another advantage to digital, adds Duncan, "is that it enables us to offer a lower individual ticket price. A large portion of our audience is school groups, so giving schools access to the production via stream means that anyone with internet can see these amazing shows."

Davis sees immense creative opportunity in the "new box of toys" emerging from the hardships facing theater in recent months, declaring "The versatility that comes with the array of digital tools at our disposal is exciting!" while Andrew Pond extols the expanded diversity of voices represented in performance mediums of all varieties. Declares Bradberry, "We may not all be in the same room, but we're still all in the same space."

Pegasus Theatre Young Playwrights Festival, streaming through January 31. Pegasus Theatre hosts a trio of plays by high school students from Lane Tech, Kenwood Academy and UC Lab School—among them, a quirky tale of a museum curator who delves the secret of the Mona Lisa—for their 34th annual Young Playwrights anthology. Details at www.pegasustheatrechicago.org

PrideArts Winter Zoom Series, ongoing through February 16. This LGBTQ-focused collective's weekly series continues with Tarell Alvin McRaney's Marcus, or The Secret of the Sweet, Claire Dobbs and Sophia Zinger's Shut Up and Kiss Me and the anthology Lesbian Shorts, featuring plays by Edwin Sanchez, Carolyn Gage and Pete Blatchford. Details at www.pridearts.org

Theatre In the Dark's Audio Dramas of 2020, streaming on-demand through February 14. If you missed this troupe's all-audio zoom adaptations of the noir-ish Three Stories Up, apocalyptic science-fiction A War of the Worlds and the holiday classic A Christmas Carol (all featuring international casts), these recordings allow you to catch up at your leisure. Details at www.theatreinthedark.com 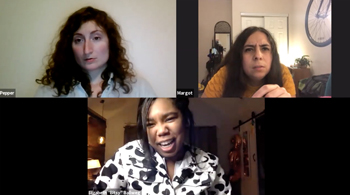 Broken Nose Theatre presents Bechdel Fest 8: Realign, streaming January 29-March 26. The Bechdel-Wallace test mandates women of independent temper in the lead roles, and the geographically/demographically diverse authors of eight plays by selected for this year's slate promise to deliver that in abundance. Details at www.brokennosetheatre.com

Congo Square Theatre Company's Festival on the Square, zooming February 4-6. Chicago's most prominent African American troupe's three-day celebration of the arts features the awardees of a Ten-minute-Play competition, as well as interviews with alum Morocco Omari, special guest Dionna Griffin-Irons and others. Details at www.congosquaretheatre.org

Victory Gardens' New Plays for A New Year, zooming one-night-only February 12. There's no admission to this showcase of short premieres by Mackenzie Chinn, York Walker and Preston Choi (who incorporates an Open-Eye icon into the title of his play) but zoom-room regulations stipulate a limited house count, so make your reservations soon. Details at www.victorygardens.org

Steppenwolf NOW, ongoing stream series through August 31. Next up in this year-long program of new plays, ensemble member Carrie Coon stars in Rajiv Joseph's Red Folder, a tale of a first-grader spurred to seek vengeance on his classroom duties. Details at www.steppenwolf.org/now

Eclectic Full-Contact Theatre's Half Hour Audio Hour, podcasting through June. Their Patchwork Zoom Festival, originally scheduled for the spring, had to be cancelled, so in its place, the Eclectics are presenting a series of standalone podcasts featuring audioplays submitted from locations as widespread as England, Ireland and Belgium, as well as the United States, beginning with Cris Eli Blak's Breakz. Details at www.eclectic-theatre.com