How To Make A Monster: Designing Frankenstein's Outcast Offspring

Even Chicago's most sophisticated playgoers were shocked to behold the nameless protagonist in Remy Bumppo Theatre's production of Frankenstein. Audiences anticipating a marginally-mobile titan like that in the 1931 James Whale film, were instead confronted by a grotesque humanoid (called only "the Creature" in Mary Shelley's groundbreaking 1818 novel) whose likeness invoked tabloid aliens, Expressionist paintings and fledgling birds too soon ejected from the nest.

What does a reanimated corpse assembled from spare body-parts look like? That was the challenge confronting costume designer Kristy Leigh Hall, her assistant Virginia Varland and the extensive tech team under the direction of Ian Frank.

"It took a village!" Hall admits, "The design team all agreed that our Creature needed to be visually distinct from the other characters. Ian brought us some pictures of Japanese Butoh dancers—whose appearance is meant to reflect the trauma of Hiroshima—and when we juxtaposed them with [scenic designer] Joe Schermoly's snowy arctic expanses where Victor Frankenstein and his Creature end up, we had our concept."

The next step was translating abstract impression to externalized manifestation. A brief textual reference to Victor's obsession with alchemy, recalls Hall, "led us down a rabbit hole of research on chemical burns and lightning scars" to eventually emerge as the spidery epidermal discolorations staining the Creature's stark matte-white complexion (identified variously by reviewers as sutures, veins and "cracks").

If this were a movie, the actor playing the Creature would only need to don his monster drag once, but this is live performance employing company members Nick Sandys and Gregory Matthew Anderson alternating in the roles of Victor and his misbegotten offspring. In addition to the problems inherent in full-body cosmetic coverage (perspiration, abrasion, transfer to nearby surfaces), this double-duty required each of them to paint up and hose down three nights a week. 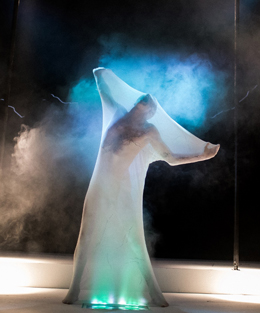 "There's no way we could have achieved this without Proaiir body spray," declares Hall, "It's an alcohol-based liquid that dries in seconds. The actor stands inside a kind of single-occupancy tent that we dubbed a 'modesty pod' and is airbrushed with it from the neck down, before retiring to the dressing room to apply it to his face with a Kabuki brush. Then it's back into the tent to stencil on the skin markings, followed by a barrier layer to fix it in place."

The complete head-to-foot transformation takes an hour to apply and holds its shape for a minimum of two hours (precisely the running time of the show, Hall notes, with considerable relief). Afterward the actor wipes, oils and showers, scrubbing off with soap and water followed by moisturizing lotions to prevent drying and chapping. Hall is effusive in praising Sandys and Anderson for their willingness to embrace the physical discomforts of their characterizations—even to shaving their heads.

The contradictions engendered by a countenance described by critics in such vivid language as "the nakedness of a peeled twig" and "eyes like open wounds" in "a skull like a cracked eggshell" is evidenced in the response of theatergoers observed to lean forward in sympathy for Shelley's misshapen hero, only to shrink back in revulsion. Nobody has been reported to have actively fled the auditorium in mid-performance, says Hall, but adds, "Nick and Greg make it scary when they have to, but they also make the Creature very vulnerable. I think Mary Shelley would have approved."