Nobody had actually planned a festival to honor the 200th anniversary of Mary Shelley's Greatest Hit, so it came as surprise to everyone when no less than four new-or-nearly-new adaptations of Frankenstein (subtitled by its author The Modern Prometheus) were announced for Chicago's 2018-19 Season, all as dissimilar as our vision of the creature at the center of the horror classic's disquieting metaphor.

Precisely what is that metaphor, though? There opinions differ.

"We all know about the 'Let us each tell a ghost story' origin myth, but we forget that Shelley had recently lost both a child and her sister, and so, began her novel while surrounded by literal death." Lifeline Theatre adapter Rob Kauzlaric reminds us, "Many scholarly interpretations of Frankenstein focus on the advances of science or the hubris of mortal scientists, but I saw it as a journey of grief, and so my protagonist is a woman in mourning who creates a monster out of her sorrow at her father's passing." 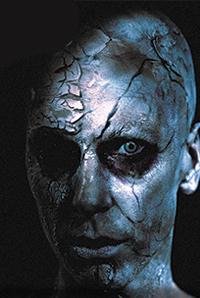 "[British playwright] Nick Dear's adaptation brings a new perspective to the story by telling it from the creature's point of view." insists Nick Sandys, one of the two actors sharing the aforementioned role for Remy Bumppo Theatre in its new home at Theater Wit, "This allows audiences to sympathize more fully with the outcast—the "other" in modern parlance—besides foregrounding the importance of language and social forces in forging identity."

"Two hundred years later, Shelley's themes are still hugely relevant!" proclaims Manual Cinema co-artistic director Sarah Fornace, "We are at a moment where the technology involved in our everyday lives is shifting rapidly. Shelley's novel questions how we are responsible for what we create, and how what we create ultimately affects how we are created."

The literary fashions of Shelley's day frequently dictate an abundance of exotic locales exciting the limits of its readers' imaginations—in this case, a panoramic voyage encompassing a veritable catalogue of the elements: fire, water, wind, snow, and rain in far-away lands ranging from the forests of central Europe to the Scottish coast, and all the way to the North Pole, 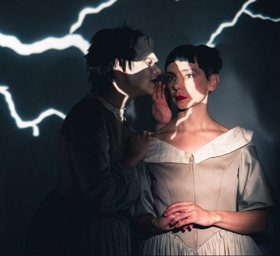 Kauzlaric's internalized approach to his narrative reduces its spectacle to the interior of its heroine's consciousness, while Manual Cinema's abstract iconography facilitates physical replication "recounted in a pastiche of visual idioms scavenged from a century of cinema—magic lanterns, crankies, shadow and on-camera puppetry, along with live actors."

The premiere performance of Dear's Frankenstein at London's National Theatre caused a sensation for its brutal scenes incorporating nudity, sexual assault and bloody murders, but Sandys assures us that intimacy director Kristina Fluty is sensitive to the close confines of Theater Wit's storefront studios. Likewise, he promises that the intricate violence on stage will involve "dry effects over the spatter version."

The common goal of all these productions (as well as a fourth, scheduled for Lookingglass in the spring) is to offer audiences alternative interpretations of the fable defined since 1931 by the Hollywood film. "I want to engender conversations about grief and how we find our way through it." says Kauzlaric, while Fornace speaks of "coming away with a fresh understanding of the story we think we know." and Sandys welcomes the challenge presented by its "bruising descent into a nightmare world both classic and contemporary."