No Butterflies Allowed: Vietgone Looks at War in Southeast Asia from the Other Side

As much as we wish it weren't so, the initial face of upward mobility is usually that of the "good servant"—patient, humble and ever-willing to sacrifice themselves in support of their masters' values. Qui Nguyen (pronounced "Nyen") has forged his career on social commentary expressed in Marvel comic myth and Hollywood-style martial combat, however, and apprises us at the very outset of Vietgone that his will be no sentimental tale of Gunga Dins, Uncle Toms or Madame Butterflies.

To begin with, his Vietnamese lovers are no rice-field peasants, but an employee of the American embassy in Saigon and an ARVN (Republic of Viet Nam) combat pilot. They speak in hip-hop idiom and sing in Rap tempo. They drive motorcycles and helicopters, swap sex-chat and meet un-cute in a refugee camp at Fort Chaffee on the western boundary of Arkansas. Their U.S. allies, by contrast, speak in pseudo-Anglophone gibberish or G.I. pidgen—e.g. "Nice to meeting you, lady."

More perplexing than the prospect of starting a new life in an isolated region of a foreign country are the attitudes of their rescuers toward strangers hitherto demonized, politicized or romanticized.

All of which begs the question, what is this play doing at Writers Theater, in the affluent North Shore suburb of Glencoe? "Damn! There's a lotta white people in here! " remarks a character upon surveying the audience, "Yo, what's up, white people?"

Artistic director Michael Halberstam is unruffled by the question, "Writers Theater has discussed Lavina Jadhwani helming an Asian or South Asian project here for years. When she brought Vietgone to our director of New Work [Bobby Kennedy] after observing its development at the Ashland Shakespeare Festival, I responded to their enthusiasm." 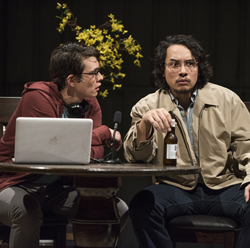 Though Jadhwani is quick to declare "I'm proud to be directing the first Asian-American play in the Writers Theater canon," her chief concern—after the difficulty of sustaining the honesty of the humor demanded by the rigorous acting—during rehearsals for this tech-heavy play was the multi-unit scenic design spanning several locales, from an air force base in Viet Nam to a road trip along Route 66 from El Dorado, Arkansas to the coast of SoCal.

"I expected the transitions to take the most time, but the team had great collaborative energy. I'm excited to have them all in one room together." She says of the Asian-American and multi-racial artists making up the performance company. [In preparation for the scenes pairing Nguyen's lyrics with Gabriel Ruiz' musical arrangements and Tommy Rapley's choreography, auditioning actors were asked to demonstrate their rapping skills as well as read from the script.]

The plight of exiles who have witnessed their communities vanish from global consciousness as maps are altered and histories rewritten is not restricted to any one race or culture. "Vietgone re-frames the refugee experience in a powerful way," insists Jadhwani, "I hope audiences from all backgrounds will see themselves in this story."