Rehearsing The Duchess: For The Duchess of Malfi costume designer, Tatjana Radisic, the challenge was to create a high-end fashion line for the rich and powerful inhabitants of a world that doesnt exist.

This is the second in a series of articles documenting the production of John Websters tragedy directed by Michael Halberstam, which opens at Writers Theatre in Glencoe this Wednesday, May 24th.

Part II: Tatjana
Costume designer Tatjana Radisic is accustomed to bridging worlds. She came here from war-torn Serbia in 2000 with a degree from a five-year program in costume design and years of experience in Serbian theatre. But she had no idea how things are done in Chicago. I knew nothing. Thrift store? Whats that? Where to find thrift store? Where to buy fabrics? Where to rent costume? Back home, you have to build everything or buy in regular store. Theres no place like Broadway Costumes where you can rent.

Radisic had also never worked in a theatre that didnt have its own fully-staffed costume shop. Her first job in Chicago was designing costumes for a childrens summer camp production with Oak Parks Village Players. I had like 70 kids, all by myself. Every day I was expecting that somebody would come in, like stitcher or somebody. Somebody to help me. No stitchers ever showed up.

But now, six years later, Radisic is one of the rising stars of Chicago theatre, with credits that include Goodman, Steppenwolf, Red Moon and Court Theatre among many others. Her portfolio is typified by highly expressionist, three-dimensional costumes like those she built for the Red Moon/Court Theatre collaborative production of Cyrano.

Based on that portfolio, director Michael Halberstam approached Radisic nearly a year ago to design the costumes for his adaptation of The Duchess of Malfi. The challenge he set her was to create high-end fashions for Websters wealthy, powerful, sexy characters using a visual language that would mirror the language of the adapted text -- more accessible and familiar to modern audiences than period costumes but still evoking the splendor and extremes of Websters world.

It has proven to be no mean task.

Radisic began by researching costumes from the Jacobean period, looking for elements she could incorporate into her design vocabulary. First, I have to find some connection with the period. I researched clothes of the period, made a lot of sketches, and then I was trying to see what shapes I can pull from there, what shadows I can use.

Those shadows are basic forms from Jacobean clothes drawn on heavy paper, over which Radisic sketched her own ideas on tracing paper, playing with outlines and specific elements like the width of the shoulders, the opening of a robe or the height of the collar. These early ideas proved to be too extreme for her directors vision. Michael told me he wanted something not so exaggerated. He said, Theres something interesting here but I dont want it so three-dimensional. He didnt want to break human form so much, he wanted sexier, he wanted to follow the shape of the human body, not cover it. So I was trying to do that more in the next phase. But it can be tough to go back and see something else.

She found that something else for the womens costumes in the shapes of flowers. For the character of the Duchess, who has three costume changes, Radisic designed a series of collars that tell a story. For me, the collar is her crown. All these collars will be removable, she can take off one and put another on. Theres a lot of symbolic meaning there. For one thing, the collar is something to protect her from violence, to literally keep her head on. And in the beginning shes closed, like the petals of a bud. And then she opens more and more; when shes meeting with her beloved, shes very open. Then she realizes shes losing him, things are going wrong in her life, and she closes herself again. 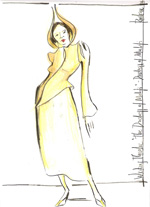 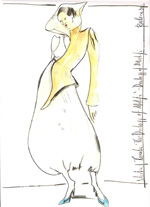 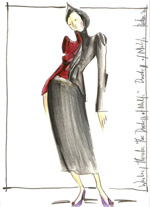 But with the mens costumes, especially, it was a continuing challenge for Radisic to rein in her preference for exaggerated, distorted, even grotesque shapes. Halberstam sent her back to the drawing board a couple of times more. Michael still said after try number three, too exaggerated, too many details, theres no human body, he wants to show human body. Because I was still covering the body a lot.

Finding a way to bridge her own sensibility and her directors vision was a long process but a satisfying one.  I dont want to just use long black coat, because thats not me then. I dont like when I just have a regular sleeve, I try to break to make some texture. Its my style. I was trying to find what does he want and still to keep my world, my sensibility. I was not frustrated, I was not worried. I knew that I would find it, but sometimes you can be like . . when? But I love this because its something I didnt do before, this was a challenge.

The final sketches for the men retain only small elements of the Jacobean styles she began with -- a gold chain at the waist, tightly fitted waistlines, short jackets that follow the hips, high collars -- but the feeling is indeed of something familiar and strange at the same time. 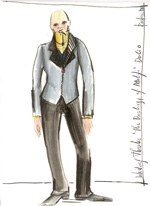 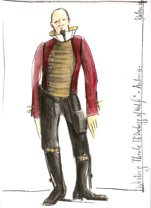 As Tatjana puts it, I dont want the audience to recognize themselves on stage. I think thats why we go to the theatre, to another world, so once were there, we can say, It reminds me of something, but I dont know what that is. I think we have to put these characters on different level, give them different world. To be contemporary but not to be. Its hard to describe. I hope we found it.