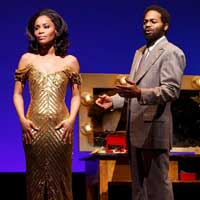 Average Rating based on 14 reviews

"...The songs are why most people are coming for a glamorous downtown night out and they are performed with style, panache and elegant choreography from Patricia Wilcox and Warren Adams, often a precise re-creation of signature Motown moves. I didn't like the way Motown the Musical keeps interrupting those great numbers for uninteresting backstory scenes when I first saw this show in New York, and I don't like that any more now. (Sing it Diana, someone shouted Thursday, even as she barely got out any of the Theme from Mahogany). As far as I can tell, the script has not changed in any meaningful way from the Broadway production. It still sometimes fights the song."

"...Think of this show as the speed-dating version of Motown history, with Charles Randolph-Wrights direction suggesting both he and the members of his large and gifted cast have gulped large quantities of Red Bull. With barely any breathing time, the story of Motown spins out in roughly chronological order here, as moments of social history are dealt with even more quickly (sometimes cartoonishly) via bits of archival video. Those who simply want to be reminded of their favorite singers might find this express thrill ride into pop music heaven a virtue."

"...Gordy's Gordy is a wholesome hustler who works too hard, gives too much, and practices an if-you-love-it-set-it-free philosophy when the musicians he's nurtured "like a father" move on to bigger labels. Even a multimillion-dollar lawsuit filed against him by the Holland/Dozier/Holland songwriting team earns a bewildered, more-in-sorrow-than-in-anger response. In short, don't expect any intense self-scrutiny here. What you can expect is a whole lot of hits from the absurdly great catalog Gordy developed with ridiculously talented artists like Smokey Robinson, Stevie Wonder, and Marvin Gaye. Ethan Popp's arrangements all tend to end the same way. But the singing and choreography in Charles Randolph-Wright's two-and-a-half-hour touring production are exhilarating. Chicagoan Allison Semmes is something special as Diana Ross."

"...Motowns touring cast is top-notch, though, and youll likely tap your toe throughout. Reed L. Shannons young Michael Jackson is a talented crowd-pleaser, and many of the songs have been given a sort of electric new feel on stage. Motown is more of a staged, fast-paced concert than a fully fleshed out musical, but for some, thats all they need to take in the still-beloved music from a defining era."

"...Motown the Musical has a book by label founder Berry Gordy, Jr., based on his memoir To Be Loved: The Music, The Magic, The Memories of Motown, and its no surprise that Berry Gordy makes Berry Gordy look good. From the opening of his Hitsville U.S.A. studio in Detroit, through his affair with Diana Ross, to his barely acknowledged legal dispute with songwriting-producing team Holland-Dozier-Holland and all the rest of Motowns ups and downs, the musicals B.G. (Clifton Oliver) comes across as never less than reasonable, even noble. In this remarkably favorable feat of autohagiography, Gordys only fault was that he worked too hard."

"...But the book issues are superfluous because the audience is in attendance for one reason alone, the Motown songbook, and on that level, this musical never disappoints. This is aided by the brilliant choreography of both Patricia Wilcox and Warren Adams and I defy anyone not to find the love (and respect) in Reed L. Shannon's Michael Jackson or Nicholas Christopher's Smokey Robinson."

"...Motown the Musical does deliver a vast musical treat and it summarizes the achievements of Berry Gordy in an eye-popping production that is both a nostalgic trip to our past and a fine way to introduce todays youngsters to the toe-tapping Motown sound."

"...Careers were launched by the man: Marvin Gaye, Smoky Robinson ( who in many ways was his partner and inspiration), Stevie Wonder, The Jackson Five, The Supremes ( and the after life of one Diana Ross) and more, so much more. The show features some 50 songs from those days of yesteryear but the majority of the opening night audience knew every word to every song and the ages were from teen to octogenarian. Amazing night! Songs like aint No Mountain High Enough, :My Girl, Baby I Need Your Lovin, Where Did Our Love Go, Got A Job, Ill Be There, Baby Love, and the list goes on and on- This is more like a concert that tells a back story than a regular musical- almost three hours in total! But no one seemed to mind!"

"...This production boasts a huge cast bursting with talent. It offers popular songs from ABC to Youve Really Got a Hold on Me, and everything in between. Timeless hits like Where Did Our Love Go, Please, Mr. Postman, My Girl, My Guy, and I Heard It Through the Grapevine are just the tip of the iceberg. Hearing shortened versions of these songs, performed live as they mightve been during the glory days of Motown, stir musical memories of a more innocent time. Wading through this shows tiresome book scenes ultimately reward audiences with what they came to hear: Motowns Greatest Hits. Patrons will leave the theatre feeling great and simply Dancing in the Street."

"...Arriving on the tidal wave of its hit Broadway run, Motown the Musical is pretty much what you'd expect from a vehicle designed to showcase a library of chart-toppers: a slick cavalcade of toe-tapping, hip-swaying tunes stitched together with a sketch of a storyline. What makes Motown the Musical a distinct challenge from most other Jukebox musicals are two factors. First, the massive catalog of material -- Motown founder Berry Gordy, Jr., who wrote the musical's book, had hundreds of top 10 hits to choose from, with artists such as Smokey Robinson, The Jackson Five, The Supremes, Diana Ross and Stevie Wonder at his disposal. Where do you start? Second, Motown was instrumental in changing the sound of the airwaves during a seminal time in our country's history. The story behind the music is just as, if not more, compelling than the music itself."

"...The large cast is uniformly outstanding, most performing in multiple roles. Clifton Oliver shows impressive stamina and singing chops as Berry Gordy. Allison Sims makes the most of her substantial part of the show, nailing Diana Rosss vocal style and even her appearance. Not surprisingly, the biggest crowd pleaser for the raucous opening night audience was the Jackson 5, led by a little dynamo named Reed L. Shannon (who alternates the role with Leon Outlaw, Jr.). There are also major appearances by Nicholas Christopher as Smokey Robinson and Jarran Muse as Marvin Gaye. Elijah Ahmad Lewis does a spot-on Stevie Wonder, in spite of the obscurity of his singing selections. Martina Sykes rattles the rafters with her sustained high notes as Mary Wells, one of Motowns earliest divas."

"...The upbeat tempo energizes the soul. Not only was I dancing in my seat, I left dancing in the street. MOTOWN THE MUSICAL replays the past as a Billboard Top 40. The dynamic is a fun visit back in time."