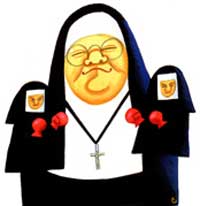 "...A bona fide born-in-Chicago international hit, this simultaneously nostalgic and satirical comedy by Vicki Quade and Maripat Donovan concerns a nun instructing her studentsthat's youon the dos and don'ts of dogma."

"...Directors Marc Silva and Vince Cracht have built a lived-in Sunday-school classroom world, virtually unchanged since this production premiered in 1993. Why toy with what works for countless droves of good Catholics, their great-aunties and in-laws? Late Nite Catechism is a nice, harmless night out-and it benefits real retired nuns, to boot."

"...This interactive comedy recreates a classroom where audience members become participants/attendees in a catechism class in Chicago. For those who attended Catholic school, it is a refresher course on religion; for those who did not attend or who are not Catholic, it's a learning experience-and a fun one! It's old-fashioned canon with a contemporary twist. Written by Vicki Quade and Maripat Donovan, this one-woman show, produced by Nuns4Fun Entertainment, stars Jenna Steege as Sister (with no additional given name). She's an old-fashioned nun, dressed in her pre-Vatican II habit, and is the very last religious in her order who still lives in a convent. She opines about changes in religious practice as a result of Vatican II, and yet she has adapted to the modern reality of the Catholic Church. By humanizing the serious subject matter of saints and sainthood, she gets the ball rolling for the laughs to begin!"

"...Between teaching hilarious new prayers (Hail Mary, full of Grace, help me find a parking space), reminiscing about Catholic school, and raising funds for sisters in need, its not hard to see why the show is such a success."

"...Donning the "40 pounds of gabardine" to welcome inquisitive pupils back this fall is Rose Guccione, an opera singer by trade, whose instruction in response to queries from the "students"ranging from pop-singer Madonna's Marianistic posturing to the special powers invested in the brown scapular displayed on the stage next to the inevitable bust of John F. Kennedy and picture of Pope Francisencompasses not only a few bars of Bel Canto warbling, but a "God the Father" who speaks with a Sicilian accent. Hey, this is an ecumenical congregation where everybody is welcome!"

"...Climbing the industrial strength stairs (an elevator is available) to the third floor of the Royal George Theater, walking down the long corridor illuminated with religious paraphernalia and show reviews-all prepare you to enter the classroom of "Sister" Mary Zentmyer, complete with the cursive alphabet wall border, chalk boards, old wooden three-drawer desk, lectern, and junior chair. Religious music sets the mood of nostalgia, whether for Gregorian chant or the remains of a hootenanny mass. Welcome to LATE NITE CATECHISM."