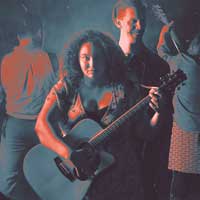 "...Wow, I thought. Not bad for an original musical about an oft-forgotten labor protest turned deadly in 19th century Chicago."

"...Still, the shows greatest asset is Kornfelds beautiful, loping score that blends modern folk stylings with traditional Americana. True to his characters, the music is often warm and hopeful  its protest music, but it isnt angry. The one true exception is the mens trial. Fittingly, the whole ridiculous affair turns into something straight out of Chicago. It was a circus, after all, so why not present it as one?"

"...The creators have made one great improvement on their original version, fashioning a satisfying dramatic arc for protagonist Lucy Parsons, whose struggle to find her voice as a union leader nicely intertwines the personal and the political. Still, she's more emblem than person. Thornton, who also directs, too often leaves her (and the rest of his cast) to raise a fist and stare defiantly into the middle distance rather than interact in compellingly human ways."

"...Far more complete and satisfying than in its original version, Nick Thornton and Robert Ollis have fashioned this exciting musical that makes this chapter in Chicagos violent history come alive. Interestingly, this story often mirrors many of the horrific events of 21st century America, but Alex Higgin-Houser and David Kornfeld have wisely chosen to leave those comparisons to the audience to imagine. Resisting hitting theatergoers over the head with any similarities to our appalling, corrupt, modern-day government, Haymarket feels as topical and contemporary as todays headlines."

"...The energetic cast of twelve talented actor/musicians, tell the story of four ill-fated so called "anarchists" and their wives through approximately 19 bluegrass/folk songs with limited dialogue."

"...Enter the theater for Underscore Theatre Company's latest production, Haymarket, and you are immediately taken back in time by a group of actor/musicians in 19th Century garb playing various traditional folk instruments including guitar, banjo, mandolin, fiddle, and washboard. (There is a random electric guitar, but nothing is perfect.) When they sing "Solidarity Forever," the union hymn, they invite the audience to sing along; thus do they assure that your sympathies lie with the cause that will be on display for the next two hours. And an amazing two hours it is: full of rousing speeches, powerful ballads, and the story of the single event that arguably had more to do with the founding of the Labor Movement than any other, the affair at Haymarket Square, Chicago, in 1886 in which police and strikers were both killed when a bomb was flung into the advancing lines of policeman who then opened fire."

"...The themes of HAYMARKET are profoundly resonant and the continuing evolution of this brazen new musical work - by a talented, creative team in ascension - a credit to Underscore's development program. In addition to exploring a central voice for human rights, the show reminds us again that much of what we take for granted came at the supreme sacrifice of others. HAYMARKET also addresses issues of law enforcement of the day. The tragic and senseless death of protesters and officers, and an act that we would call 'terrorism' today, is only the tip of the spear of the poignant story being told that leads to a corrupt criminal prosecution and the injustice of a sentence carried out against innocent men. In the end, we can never truly make amends for the miscarriage of justice. We can only pledge to never forget."

"...This is the second life in Chicago for Jeff-nominated best script Haymarket and not to be missed. In these times, Haymarket comes across as a survival guide for a city and country smarting from the festering wounds of a broken justice system. Don't miss this chance to discover your inner Wobbly."