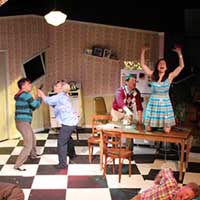 "...No doubt it's the playwright's intent to make this and every other grotesque impedimentof which there are dozens, generously doled out to every miserable participantan evocation of Claire's nightmarish daily plight. But because Claire is neither likable nor compelling in any way, none of the grotesquery that befalls her comes off as earned or impactful. This is one Punch and Judy show all concerned should be thankful to forget. Katherine Siegel directed."

"...David Lindsay-Abaire's Fuddy Meers is an absurdist comedy about a woman suffering a form of amnesia from an accident that results in her learning things one day and forgetting everything overnight. It's Groundhog Day forever for her. The play is warm, witty-and very silly. Eclectic Full Contact Theatre's new production, directed by Katherine Siegel, features a cast of seven. Jeremy Hollis' set design is composed of a kitchen, a bedroom and a basement, not all in the same home. Scenes performed in each space are highlighted by Taylor Sorrel's lighting design."

"...Who is this production for? It's definitely a comedy but to be more specific the entire show feels reminiscent of those 70's crime comedies featuring Goldie Hawn or Gene Wilder that seemed to be on every channel in the 90's. It's funny, maintains a slight sense of danger, there are a couple of weirdly bizarre moments, and it is exceptionally high energy throughout."