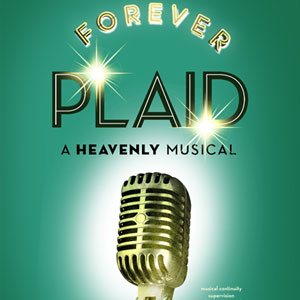 "...In Paul Stancatos very casually staged production, the Plaids had adjusted to the new world order, ad-libbing about germs and, alas and alack, cutting the bit where an audience member ascends to the stage as an honorary Plaid. The lucky man not only got to stay in his seat, but he got a special Plaid-branded bottle of hand sanitizer."

"...Forever Plaid is all ear candy peppered with upbeat comedy and poignant glimpses into the Plaids thwarted teenage dreams."

"...Drury Lane's quartet of Bryan Eng, Michael Ferraro, Yando Lopez and A.D. Weaver deliver beautifully as Sparky, Frankie, Jinx and Smudge -- "good guys" who appreciate tight harmonies and simple love songs. Besides fine voices and affable demeanor, this quartet is sincere. There is nothing disingenuous about these four pals, whose affection for each other is genuine and whose belief in truth, justice and harmony is unwavering."

"...This is Drury Lane Theatres 66th season and the perfect musical production to open after the long dreary desert of Covid cancellations. You will feel the joy and perfect harmonies of such familiar and popular hits sung by Bryan Eng, Michael Ferraro, Yando Lopez, A.D. Weaver, Ben Dow, and Ryan Foreman. Included in their repertoire is: Love is a Many Splendored Thing, Three Coins in the Fountain, Undecided, Sixteen Tons, Chain Gang, Cry, Heart and Soul, a Beatle melange, and other favorites. The cast voices are definitely heavenly."

"...Drury Lane opens its doors with the premiere of Forever Plaid, an Off-Broadway musical revue written by Stuart Ross. First performed in 1989, this now internationally performed musical features a boy band from the 50s who were on their way to a concert performance."

"...Forever Plaid is as uplifting and outstanding a show as you will ever see! Drury Lane Theaters invigorating revival of this 1989 musical review by Stuart Ross, James Raitt, and Gene Wolsk is cheery and vibrant, an antidote to the dearth of live theatre over the last eighteen months. The current version is impeccable, thanks in large part to director and choreographer Paul Stancato and musical director Valerie Maze. The story is based on a rather simple premise: In the space between this world and the next, there is the afterlife."

"...Visually this production is every bit as awe-inspiring as it is melodious. Scenic Designer Kristen Martino has created a massive, celestial stage setting, lined with color-changing plaid, that transports the audience into the Heavenly realm of the afterlife. The special effects created by this, mixed with the unearthly lighting design of Lee Fiskness, make for show-stopping surroundings especially suitable for the Plaids. Audiences will bathe in the glitter, confetti and even bubbles, as they enjoy the musical and comic antics of this gifted quartet, costumed to plaid perfection by Rachel Boylan. Welcome back to the theatre, Chicagoland! This production, a real blast from the past, is absolutely angelic."

"...Fast-forward to 2021 and the palpable excitement in the Drury Lane house for the reopening of live performances after a long pandemic intermission as The Four Plaids took the stage. This lush, effervescent production is directed and choreographed by Paul Stancato with the same finely-tuned Raitt arrangements, production music director Valerie Maze, and an exuberant, spirited cast with sumptuous voices all playing out in a glistening venue. The Kristen Martino set is gorgeous in its simplicity, incorporating massive vintage swathes, punctuated by Rachel Boylan's costumes, exquisite, state-of-the-art lighting and special effects by Lee Fiskness all combining with Ray Nardelli's brilliant sound design for a 90-minute show that soars on the wings of angels."

"...Twenty songs in 90 minutesblended and harmoniouswe have tuned into the easy listening radio station of that time. Cameos let us admire the range of the actor/singer/dancers. Mini-klieg light collages, floating disco ball diamond lights and moreDrury Lane Theatres stagecraft has that big budget Broadway feel. Most of all, these four talents are tight, tight, tight in their moves and song. From Three Coins in the Fountain to Harry Belafontes calypso, to 16 tons and what do you get? and morethere is, in this writers opinion, a goldilocks-right mix of tunes to keep us engaged and hungry for the next song."