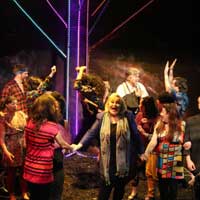 "...While director Katherine Siegel aims to make a point about gender by casting the gentleman Orlando as a woman (Aja Singletary), thus making her beloved Rosalinds drag act as a page boy more revelation than disguise, the lightness of the comedy is lost through tiresome adherence to an underdeveloped concept and overwrought, disco-inspired ornamentation."

"...Katherine Slegels production, while it couldve used some trimming, takes audiences into the woods. She offers gender fluidity in a modern retelling of Shakespeares popular, world-famous love story, performed by a company of some excellent actors. Not every member of the cast is successful with Shakespeares dialogue, but those whove mastered this skill truly stand out. There may not be a better opportunity than Eclectic Theatres production to experience this classic play so up close and personal."

"...The anchor of this play is the relationship between Rosalind and Orlando, played by Chloe Baldwin and Aja Singletary respectively. Baldwin tackles the role of Rosalind aggressively and the result is astounding. She plays both sides of the gender role coin, both with confidence and hilarity, and shows the illusion of these imagined societal roles. Singletary, playing a role originally intended for a man, makes you wonder how this play could ever work if Orlando were actually man. She absolutely owns this role. Laura Carney is a master at showing disdain as the exiled Jacques. Her deadpan delivery and facial expressions will make you glad this production allows the close proximity to the actors."