What is Left, Burns Reviews 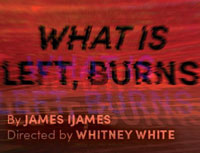 What is Left, Burns

"..."What is Left, Burns" is a rich little piece (more rewarding, actually, on a second viewing). Ijames is going to be an important American writer - Steppenwolf is smart to embrace him in this innovative way."

"...The story, which Ijames has spun specifically for this virtual rendering, is familiar. It takes the form of a brief, pandemic-era Zoom encounter between two writers of distinctly different ages whose erotic history has never fully burned out despite a silence of 15 years. This relationship turns out to be ideal material for the sort of intimacy that works best on a small screen "stage." Even more notable is that this is the most artfully realized virtual theater production I've seen to date, with two expert, ideally paired actors - K. Todd Freeman and Jon Michael Hill - directed by Whitney White, and backed by a superb technical and design team whose seamless work has resulted in what stage manager Laura D. Glenn, who oversaw the highly complex electronic media environment it required, has aptly described as akin to "filming a music video.""

"...In another worthy addition to this Year of Virtual Plays, Steppenwolf Theatre's new Steppenwolf NOW series brings us a commissioned short play from James Ijames, author of last year's marvelous Timeline production, Kill Move Paradise. In What Is Left, Burns, Ijames (appropriately enough for a play presented over Zoom), dives deep into the relationship between two compelling characters making contact for the first time in fifteen years."

"...Freeman and Hill likewise have done their homework, making their occupation as "poets" more than just an excuse for elliptical phrasing, but instead delving the reasons that wordsmiths construct their verbal monuments to fleeting emotions. In a time when it can seem like all we have is our memories, isn't a reminder that even long-dormant pasts can blossom into palpable futures just what we need right now?"