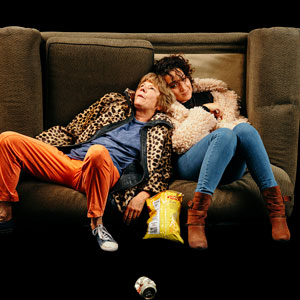 "..."This Wide Night," by Chloe Moss, follows Lorraine and Marie, two friends who bonded during their time in prison reuniting on the outside. The play opens with Lorraine, who was recently released after 12 years, visiting her former cellmate's new apartment. The rest of the play, which won the 2009 Susan Smith Blackburn prize and is inspired by real accounts of women in a U.K. prison, takes place inside this tiny apartment and follows as the two women work to reestablish their relationships to each other, the world around them, and themselves outside of a prison environment."

"...The play unfolds through a series of short disconnected scenes over an indeterminate period of time. It's set in 2008, but Marie's world has so few creature comforts (her phone is disconnected) that it may as well be a sister flat to the one occupied by the characters in Harold Pinter's The Caretaker almost 50 years earlier. These women are seemingly nowhere in the world; the paradox of their lives is that they are both invisible and seen only for the history they desperately want to move past."

"...Audiences long accustomed to jailbird-buddy fables featuring male bonding rituals are often unnerved when the gritty squalor associated with the genre is applied to female sensibilities; however, the Shattered Globe Theatre and Interrobang Theatre Project's re-entry into live performance refuses to blunt the impact of its topic with comfortable Hollywood tropes. Moss consulted actual female ex-convicts as consultants in her quest for verisimilitude in her portraiture thereof, and this same dedication to accuracy is likewise apparent in every production aspect. Said aspects include everything from Linda Reiter and Aila Ayilam Peck's fully committed performances under the direction of Georgette Verdin, to a collective display of technical expertise invoking a sordid ambiance so realistic that the incessant rain heard offstage is barely distinguishable from the real-world precipitation on Belmont Avenue."

"...It is their dynamic that makes this play so very interesting to watch. Two hander plays can be especially difficult to sit through unless there are characters of great complexity and duality, which we get in Chole Moss's piece. Georgette Verdin expertly orchestrates the rhythm of the play. Nothing feels stagnant or stilted other than the awkwardness that is baked into the script. Aila Ayilam Peck gives an engaging and heartbreaking performance as Marie and Linda Reiter shines as the equal parts, charming and annoying (in the most endearing way) Lorraine."

"...In "This Wide Night," Chloe Moss has taken a situation, inspired by personal conversations with real-life British prisoners, and presented two characters who have found a new kind of incarceration awaiting them after they've been freed from their jail cells. Marie and Lorraine learn that to find true freedom they must learn to adjust to the outside world and create an interdependence with each other. It's also a lesson, following the restrictions of the pandemic, that many of us are all having to learn."

"...Moss's script is less a cohesive play than a series of short vignettes, but thanks to these two gifted actors and director Georgette Verdin's determination to help them find any source of humor they can mine in their characters' otherwise bleak lives as they cling together to ward off their loneliness, we grow to care for these women. By proxy, we are seeing thousands of others like them who, having "paid their debts," are cast aside by society as if their bills are still outstanding, as if nothing they could ever do would be able to wipe them clean."

"...This is a top pick for anyone who admires seeing world class talented actors at the top of their game. Director Georgette Verdin and the creative team are pitch-perfect in keeping our focus on the two characters of the story, giving us a chance to see these two superlative actresses at work."