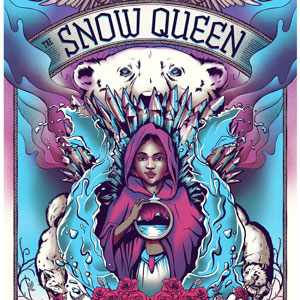 The House Theatre of Chicago at Chopin Theatre

"...These are very talented performers - in each and every case - but the show also felt stiff, overplayed and tense at times, as if it were wanting a deep relationship with its audience, but not quite sure how to craft one. Part of the issue, I think, is that the show needs first to relax and enjoy its own existence; if the imaginative world is clear, friendly and inviting, the kids in the audience will find their way on their own. They don't need to be pushed."

"...But in order for the story to fully land and make the connections between the personal relationship of Kai and Quin, the larger responsibilities of the characters to the world they share, and to the audience itself (the younger members of whom will definitely be inheriting a damaged planet), we need a little more clarity at the top of the show particularly about Chione and how she views her own role on the planet. (You can watch some prologue videos, created by Ratke and Matthew C. Yee, about Chiones animal companions on the House website; I wonder if incorporating something like this into the show itself would add to our understanding about Chiones backstory.)"

"...The music and sound are handled by Kevin ODonnell and Olanrewaju Adelowe and the lighting is by Trey Brazeal. The set is designed by Sully Ratke, who also did the costumes and the entire production directed by Amber Montgomery. There are projections (Liviu Pasare) that help bring it all together. There were a few spots where sight lines get fuzzy as the characters are on the floor and those seated in te upper seats cannot see them. They are sparse and due to the design of the space, understandable. Caitlin McCarthy handles the props."

"...Chicago's treasure trove of holiday theatrical offerings is a little richer this year. One play that's not exactly new, but has a timely, contemporary new twist this time around, is making the familiar fairy tale a lesson about living in harmony with everyone around us and doing something positive to encourage the global conservation that'll effect generations to come. This new play by Lanise Antoine Shelley is perfect for the entire family although, at 85 minutes, children under ten may become a little antsy."

"...The talent of all involved in the making of Shelleys epic is undeniable. Well-cast and artfully designed, individual components of The Houses production sparkle and inspire; and yet, glittery tricks are not enough to mask the bloated book of this well-intentioned adventure. Provided extraneous topics are chipped away in future iterations to streamline the plot and subject matter, The Snow Queen could rival the gorgeous legend of its source material."

"...The story moves seamlessly from scene to scene, often being led by the arctic fox, puppeteered by Roxy Adviento, out scanning the terrain. I cannot say enough about Jesse Mooney-Bullock's puppets. They are simple but magnificent. Chione's polar bear is a real treat, coming from out of the audience with the help of two puppeteers. They move realistically and with the characters as part of the story and as an extension of the puppeteers."