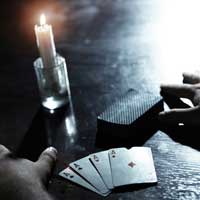 "..."The Seafarer," unlike McPherson's earlier works (including 2001's "Port Authority," now playing at Writers' Theatre) doesn't depend upon long, self-revelatory monologues. Instead, these shattered souls come through in snippets of argumentative dialogue and reminiscence, rendered with nearly perfect timing and nuance by Miller's riveting cast."

"...It is Sharky's reckoning with the devil that stokes the fire here, with Waller as the tragically lost soul and Theis, chilling in his coldness, supplying McPherson's scorching description of hell. McPherson can go on a bit, but the cast, under the fine direction of Matt Miller, keeps you listening and waiting for some form of redemption."

"...It may not sound like ideal holiday fare, but McPherson supplies a kind of provisional redemption that feels more earned and far more genuine than what you'll find in most entertainment options this time of year. Matt Miller's fine staging for Seanachai Theatre Company is beautifully acted, particularly by an energetically cranky Brad Armacost as Richard and a touchingly befuddled Ira Amyx as Ivan."

"...The rapport forged by the five cast members' ( Dan Waller, Brad Armacost, Kevin Theis, Ira Amyx and Shane Kenyon ) extensive experience performing together likewise reinforces the interactive dynamics of McPherson's hard-luck revelers ( even during the long scenes devoted solely to the generically spectator-unfriendly business of cardplay ), so that we recognize, almost at the same time as they do, of how their fates are inextricably intertwined. This realization might not make them any more lovableto us, or to each otherbut constitutes reason enough to halt their bickering and unite in defeating the high-stakes gambler who, when he speaks of "going to the hole in the wall," does not mean the sidewalk ATM."

"...For those theatregoers looking for a show thats not Christmas-centric but more Christmas-adjacent, Seanachai Theatres production of Conor McPhersons The Seafarer would do quite nicely. The show smuggles a nugget of Christmas good will into an otherwise bleakly Irish comedy."

"...The Seafarer is an excellent black comedy thriller, with fine acting by all five cast members. It's not your typical holiday play, but it's highly rewarding as a character study. Director Miller maintains perfect timing with his cast throughout the two-hour performance. The set design by Joe Schermoly is greatly enhanced by Julian Pike's lighting. Dialect coach Elise Kauzlaric has done an excellent job as the actors manage the Irish tongue convincingly."

"...The gem of the bunch is Sharkys older brother Richard, a joyful fish of a drinker who needles Sharky constantly and yet needs his sighted (and caring) brother with brimming desperation. Brad Armacost is riotous as this blind, manipulative sot, a really creative drunk whose chief mission in life is to support the Irish whiskey trade. (His second dedication is to rousting the drunken winos who congregate outside his back door. The man has his standards.)"

"...McPherson has cleverly written this allegory with clever elements of suspense, dark humor as well as a stark portrait of the estrangement resulting from a life dominated by alcohol. The Seafarer is an excellent comic drama filled with quirky characters and spot-on acting from the veteran cast. Besides Armacost's great work, I thought Ira Amyz landed his line with deft aplomb. From comedy to pathos, this cast gave a clinic on character acting. Dan Waller was subtly effective with his nuanced struggle with guilt and human frailty. The Seafarer is an excellent work performed with skill. Don't miss this heartfelt look at the shame of a life dominated by drinking."

"...The heart of this production is really the script. The writer, Conor McPherson, is "one of Ireland's premier contemporary playwrights" according to Seanachaí Theatre Company, having written plays that ended up on London's West End and Broadway. The language feels not only true to a working class Irish family, but is understandable to an audience unfamiliar with the Irish vernacular. The dramatic moments are so wonderfully written, and beautifully directed by Matt Miller. The Seafarer at The Den Theatre doesn't have Santa Claus or Reindeer, and you probably shouldn't bring kids, but it does speak to what is important during the holidays: being grateful for the people who love and support you, even when you're a scrooge."