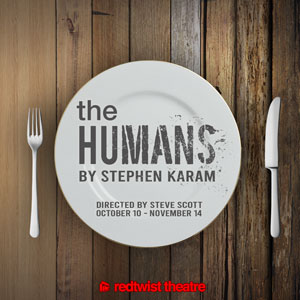 "...Real conflicts about religion, marriage, health, and success are broached, though at the end of the meal nothing has even begun to be resolved. It is to Karam's credit that this lack of release does not take away from the lived-in feel of the interactions between people who clearly love one another, but possess no tools to express it. (This comes through even though the cast wears face shields when not eating or drinking, which occasionally makes the dialogue hard to hear.)"

Around The Town Chicago- Somewhat Recommended

"...When too much is left to the audience's imagination regarding set design, combined with the fact that too many things go awry with this faulty apartment, the show leans towards not being realistic enough. Combine that with an intentionally detailed script, and you have a recipe for disaster. What this means is that over time, we no longer take the characters as seriously as we should. The multiple levels of disconnectedness make us unable to comprehend where the story is going, so that when the climax finally arrives, we feel that it is either lackluster or silly. This subsequently makes the ending seem overdone or uninspired. That being said, the fault in this particular production probably has more to do with the awkward staging than the original source material. If staged properly, the underlying story would have been easier to grasp. The ending would have been rather powerful and could have better pointed up the existential condition of humans ultimately being lost in the dark."