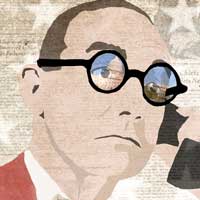 "...The American Blues production, which is deftly cast and ably directed by Keira Fromm, hews relatively closely to the original Broadway staging, albeit with greater intimacy and laudably more emphasis on the private costs paid not just by those who choose to live their lives in public, but by those who love them. Thus the best scenes are between Philip Earl Johnson, who plays the title role, and the columnist's wife, Susan Mary, with the actress Kymberly Mellen (where has she been?) unlocking all kinds of layers of complicated pain. Similarly fine is the work of Coburn Goss, who plays Joe's brother (and fellow journalist) Stewart Alsop, the Horatio of this story and a man who loves his brother even as he is appalled by the extent of his scheming ambition."

"...Director Keira Fromm has cast the show impeccably and overseen just the right chemistry among its characters. But she cant quite disguise the way Auburn has drawn the 1960s with the broadest of elementary textbook strokes, or how the plays final scene (which should not be divulged here) feels too much like pure invention in the service of a dramatic full-circle ending."

"...If you're a political junkie, The Columnist is definitely the play for you. And if you're interested in how politics and the news media worked 50 years ago-compared to today when the president accuses the news media of being "the enemy of the people" and publishing fake news-Auburn's play will help you appreciate the contributions of the news media to our political culture. Those contributions have never been more important than they are today."

"...The Columnist, persuasively shaped by Keira Fromm, is a cautionary screed. This valuable drama powerfully conflates lying about love with prosecuting the wrong war. Ironically, Alsop was protected by another nasty closet case, J. Edgar Hoover (who saved his righteous wrath for real freedom fighters like Martin Luther King). It takes one to know one. Cohn, Hoover and Alsop-there's a real axis of evil."

"...The Columnist is rich in history, in strong characters and with a glimpse into the folks who influenced a change-filled period in our history. Once you see The Columnist, youll remember Joseph Alsop thanks due to Johnsons performance and Auburns characterization."

"...Leave it to American Blues Theater to do their first production in their new home at Stage 773, that will create a true stir. The play, "The Columnist" in its Chicago premiere is David Auburn's story about power od the press with a dash of sex and betrayal thrown in. It is the story of Joe Alsop, one of our nation's most important and influential journalists. His column is watched closely by all of the nations politicos and this writer is feared by many courted by others and of the greatest import, has great influence on those who have similar positions with other papers. Many of you are not "newspaper" people, since our lives rely on the internet today. But back in time, the mid-1950's thru the late 1960's, daily newspapers and their columnists were important to the sales of the daily newspapers."

"...David Auburn's "The Columnist," a 2012 biographical play on Joe Alsop, formidable journalist and erstwhile friend to senators and presidents of the forties and fifties, is thus a curious play for these times-a reminder of a moment not so long ago when news was not in the purview of anyone with a smartphone and a Twitter account but composed and interpreted by a social and intellectual elite. Harvard-educated Joe Alsop along with his Yale-educated brother Stewart, relations of Eleanor Roosevelt and friends of JFK, were notorious in their day for their widely syndicated column, "Matter of Fact.""

"...David Auburns drama, which is more informative than entertaining, depicts the later life of Joseph Alsop. Its more character-driven than plot-oriented. We see him as a conservative journalist whose private life concealed something unspoken. This secret, which eventually became common knowledge to those who knew him, haunts this arrogant, verbose columnist to the very end. We meet in Alsop an egotist who shut down everyone who ever reached out to him. Had director Keira Fromm infused her production with a tad more energy this play would really sail. As it is, the acting is quite good, and character development is flawless. Staged on Joe Schermolys simple, tasteful unit set, this play, which focuses on a handful of real life people, illuminates a period in history in which the power of the press was paramount. It could actually make or break a man, and it did. Much like today."

"...Keira Fromms directing starts at a leisure pace but she raises the dramatic temperature the second act, turning what had been a casual talky show into a real attention grabber. Joe Schermolys scenic design effectively relies on the movement of a few props (designed by Alec Long) to change locations. Christopher Nevilles costume design nicely reflects the 1960s. Jared Gooding designed the lighting and Christopher Kriz the sound plan."

"...If youre a political junkie, The Columnist is definitely the play for you. And if youre interested in how politics and the news media worked 50 years agocompared to today when the president accuses the news media of being the enemy of the people and publishing fake newsAuburns play will help you appreciate the contributions of the news media to our political culture. Those contributions have never been more important than they are today."

"...The Columnists examination of the role of the press during pivotal moments in our history serves to illustrate how much the media and its relationship to Americans has changed in the past fifty years. Auburns slice of life portrayal of Alsops career offers some comfort by revealing the hardships our nation has faced in its history as well as how journalism has served as an important facet of its growth and development."