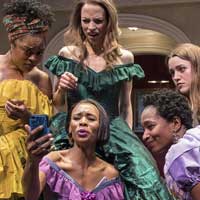 "...I hope Douglas and Schwimmer do more work on "Plantation," rendering it more as a human comedy of believable women all forced to deal with the original American sin and obliged to negotiate a more enlightened fairness. It was given a major production before it was fully ready; but I think it could really be something."

"..."Plantation!" in the end most feels like an exceptionally good extended comedy sketch, which also happens to be Douglas' aesthetic background. It can be, and hopefully will be more."

"...But for all that, this "Plantation!" needs some tending. The clichéd characters lack dimension, and contrivances abound. Case in point: the rainbow-colored, antebellum-style taffeta gowns the characters don for dinner. The costuming sight gag adds little to the narrative. And the knockabout chase near the end of the play, in which a white character wearing Ku Klux Klan robes tries to intimidate the African-American characters, was too unsettling to be funny."

"...The conflict in Plantation! mainly comes down to a battle between the two sisterly trios: both want the plantation, only one of them can have it. And while the productions incredibly broad style of humorits a farce through and throughoccasionally strikes true, its not enough to justify even a modest 95-minute run time. Neither is Douglass script, which deserves credit for not doling out forgiveness where forgiveness isnt due, yet always settles for the easy joke. When the incredibly insecure Kara is described as suffering from typical middle-child syndrome its hard not to throw your hands up in despair. Explaining the nuances of racism and reparations is one thing (god forbid someone go to the theater and actually learn something new), but do they have to explain the jokes as well?"

Stage and Cinema- Not Recommended

"...It's so well-intentioned that the results are doubly deplorable. Lookingglass Theatre Company's Plantation!, a world premiere by ensemble member Kevin Douglas staged by their own David Schwimmer, might have mattered. That's the saddest thing about this clumsy comedy. Its goal is golden - to explore the painful payback of retroactive justice. Its worthy subject is reparations, damages delivered to compensate the victims' offspring for the cumulative curse of chattel bondage."

"...We highly recommend this hilarious female production. It is a complicated story with convoluted feelings towards race; nonetheless, it is a must-see play that is FUN-COMFORTABLE!"

"...On the tech side, the set (Courtney ONeill) is magnificent with a second floor that seems very real. The ladies do a lot of stair running, and the shelves and furniture looks good enough to move into. Mara Blumenfelds costumes are delightful, in particular the Southern Cotillion dresses for their dinner party and the props assembled by Amanda Hermann are amazing, to say the least! The sound ( Rick Sims, who also did the composition of incidental music) and the lighting (Christine A. Binder) are the icing on the cake. Well done ( as always at Lookingglass)!"

"...While there are some strange, awkward moments that occur toward the end of this play, and the ending is a little contrived and pat, this is still a play that offers lots of food for thought and plenty of laughs. There's no stereotypical goodness or evil in this production, although there are a few "Oh, no you didn't" moments. Kevin Douglas' new play offers similar themes as his previous premiere at Lookingglass, "Thaddeus and Slocum: A Vaudeville Adventure." It's an evening of nonstop hilarity that also supports an important, honest message. This production will send audiences out of the theatre sparked with some brand new ideas about race relations."

"...The pleasures of "Plantation!" reside almost entirely in its comic moments, strained as many of them are. There can be a workable satiric comedy on the race issue. Bruce Norris has done it. Douglas obviously believes that reparations are a viable talking point in the ongoing racial discussion in this country, but in "Plantation!" that debate stirs the emotions very little, until the final blackout, which might stir a bit of discussion among patrons. But what works best is the snappy dialogue, especially the attitude-drenched talk from the Chicago ladies. Still, much of the humor will appeal primarily to audiences with a high tolerance for silliness and improbability. Douglas shouldn't concern himself with avoiding alienating or offending his viewers. The current play undeniably entertains, when it needs to anger and challenge."

"...Plantation!, now receiving its world premiere in a production at Lookingglass Theatre directed by David Schwimmer, is a comedic take on race and reparations in the 21st century. Written by Lookingglass ensemble member Kevin Douglas, it explores how one Texas family can atone for the past when the complicated history of their family fortune is revealed. While this may sound like the set-up for a much heavier play, Douglas comedy treats these questions as touchstones within a broader farce, favoring silliness over solutions."

"...Louise Lamson expertly brings that conflict to life. This reviewer does not want to reveal the ending, but while Kimberly makes some unforgivable choices in her attempt to save her inheritance, Lamson also infuses the character with a certain honesty that allows the audience to understand her selfish motives, even if not agree. Douglas cleverly highlights the ways in which both sides can be sympathized in a thought-provoking and creative fashion."