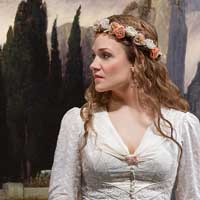 "...Take an ancient Greek myth as filtered through an 18th century opera, and transform it into a contemporary meditation on love, art, grief, remorse and mortality by way of an elaborate intertwining of opera and ballet. By any reckoning that is quite a monumental act of layering. And it is only the barest outline of what John Neumeier, the "triple threat" director, choreographer and designer, has done in his new ultra-modern production of Christoph Willibald Gluck's "Orphee et Eurydice" - a production that also marks the first collaboration between Lyric Opera of Chicago and the Joffrey Ballet."

"...Performances by all three vocal leads, but especially by tenor Dmitry Kolchak, as Orphee, are superb. (Sopranos Andrianna Chuchman and Lauren Snouffer are Eurydice and Amour.) So is the Lyric Opera chorus, though we don't get to see them until they come out to take a bow. Director-designer-choreographer John Neumeier's updated but earnestly melodramatic take on the 18th-century libretto, on the other hand, teeters at the edge of unintended camp-and occasionally falls right in. It doesn't help that in the first two acts he's working with a sometimes soporific (if lovely) score. In the final act, when the music pushes into glorious high gear, the whole thing's pretty much redeemed, although-spoiler alert-Neumeier's Eurydice lives on only in the choreography she inspires."

"...Lyric Operas Orphée et Eurydice is a creative collaboration in which vocalists, dancers, chorus, and instrumentalists are equally important in bringing the drama to life onstage. Exciting casting of strong, young voices; supported by the superb resident talents of the Lyric Opera Chorus and Orchestra make this venture a resounding success, and the welcome addition of The Joffrey Ballet elevates it to the superlative."

"...Neumeier extended the characters of Orphee and Eurydice in the dancing forms of Temur Suluashvili and Victoria Jaiani, so that the couple's tragic plight remained a heartbreaking centerpiece of the storyline even when no one was singing. Their transfixing portrayals - in combination with the many individual roles for members of the ballet corps as Orphee's backstage dance troupe, or as mythological spirits, furies and shadows - eliminated any sense of the dance as something separate from the opera. It was all one."

"...Based on the Greek myth of the same name, Glucks Orphée tells the tale of the famous musician and poet who descends to the underworld and charms the furies in order to regain his wife Eurydice from the grave. Its three acts arc from death to life in this world and through the realms of Hades and the Elysian Fields. Besides the titular characters, librettist Pierre-Louis Moline names only one other: Amour, or Cupid, whose suggestion propels Orphée to seek Eurydice among the dead, with the sole condition that he not look at her."

"...This emotional quality is a grand finale for a night of outstanding work for Bicket, as well as for the Joffrey dancers, whose bodies are in perfect tune with the voices coming from below the stage. Neumeier's concept is a fascinatingly detailed portrait of an artist in a moment of creative and personal crisis. These mythological figures come to life in a manner which makes Gluck's music seem like the perfect blending of their individual artistic and romantic qualities."

"...Lyric favorite soprano Andriana Chuchmans voice sparkles as the disconnected Eurydice, although since Neumeiers conceit casts her as a prima ballerina, I wish that someone with classical dance training had been engaged. Lauren Snouffer is just right as Amour, unhampered by Neumeiers decision to make this a trouser role, presumably to add a flavor of homoeroticism. Dont miss this explosion of a production. (And dig in for a season that promises one gem after the next.)"

"...Gluck's writing for Amour rises into the realm of Orphee, and Snouffer delivered it with warmth, urgency, and precision. While Eurydice's role could hardly be called thankless, she doesn't get to sing until well along in the story, and then she's carping at Orphee about not looking at her. Chuchman made a vocally assured Eurydice, with a big sound, but she came up short of the complex emotions coursing through this woman in so tantalizing and yet fraught a circumstance."

"...The Lyric, in collaboration with The Joffrey Ballet, opens its 2017/2018 season with a visual and audio stunner. The 3 powerhouse principals [Dmitry Korchak (Orphee), Lauren Snouffer (Amour), Andriana Chuchman (Eurydice)], accompanied by 60 chorus and 47 orchestra members, fill the theatre with the soulful melodies of love lost and found and remembered. And the 43 Joffrey dancers fill the stage by creating this vivid, peaceful yet chaotic other world. Orphee et Eurydice becomes this tender and discernible illustration of 'until death do us part.'"

"...His dramatic choices are sound. For one, staging the opera in modern dress and changing Orpheus and Eurydice into a ballet director and his prima ballerina is a fitting transposition of their artist/muse relationship, and it certainly makes good use of the Joffrey ensemble. For another, keying this story as a metaphorical journey to the Underworld - as an allegory for grief - is a valid interpretation. (Here, Eurydice's spirit lives on in the Orpheus's new ballet.) For a third, he creates and maintains an intimate environment for its two main characters, which is difficult with an omnipresent moving ensemble."

"...The result is lovely and ambitious, but not integrated, perhaps because Neumeier had the Herculean task of devising almost all the art on the stage (the large off-stage choir and orchestra was conducted by Harry Bicket with Chorus Master Michael Black). It is a unified but segmented vision that should blossom, expand and entwine under the future planned collaborations of the opera and dance companies."

"...This is a performance that can be described as historic. For starts, Orphée et Eurydice is the opening opera of the Lyrics 63rd season. On opening night, high temperature and humidity competed with the finery tuxedos and ball gowns swishing in the lobbies before the performance began. From the vantage point of the dress circle (3rd floor), the orchestra standing to give a rousing rendition of the national anthem became a curtain riser on just how many of the audience membersopera diehards all, one might presumehave classically trained voices. Within close earshot was both a sparkling soprano and stalwart tenor singing loudly above the-rest-of-us din; scattered about the dress circle one could hear more."