A Fall Season After All: Streaming and Zooming in the Shutdown of 2020

A miracle didn't arrive to chase away the fear and the gloom, but history has demonstrated that art will always find a way. As the weather cools and days shorten, theaters mired down in despair during the spring of this annus horribilis have shaken off their shellshock and rallied to the challenge of respite for audiences grimly and bravely making the best of a spartan holiday season. Most of these online shows run under two hours with choose-your-own-admission ticket prices.

For those looking get in the Halloween spirit, home-school classes and book clubs zooming from their individual residences are reported to be conducting communal viewings of virtual plays accompanied by likewise virtual Rocky Horror-style parties featuring food, drink and even costumes appropriate to the occasion. Who says you can't have a festive post-show discussion?

Groups of Ten or More People, Littlebrain Theatre, open run. In this re-imagining of Shakespeare's Love's Labour's Lost, a group of friends and would-be lovers decide in March of 2020 to isolate until the end of the pandemic shutdown in—oh, a few weeks. (You know how that turned out.) Tickets and info at www.facebook.com/littlebraintheatre/

A War of the Worlds, Theater In the Dark, audiostreaming October 15-November 21. A Chicago science journalist travels downstate to investigate a UFO sighting in Corey Bradberry and Mack Gordon's new adaptation of the 1897 science-fiction thriller by H.G. Wells—a name coincidentally shared by our newshound. As the company's name implies, the story is narrated exclusively in voiced dialogue, recorded speeches and live-feed foley. Tickets and info at www.theatreinthedark.com

Intimate Apparel, Northlight Theatre, open run. Lynn Nottage's bittersweet tale of an African-American dressmaker and a Jewish dry-goods vendor in pre-WWI Manhattan is constructed in the manner of a graphic novel assembled from production photographs and title cards. Tickets and info at www.northlight.org

Box and Cox, PrideArts, zooming October 22 and 29: We don't often associate farce with the Victorian era (Charley's Aunt and The Importance of Being Earnest notwithstanding) but John Maddison Morton's screwball comedy of two roommates unaware of their cohabitation is a lesson in the virtues of compromise. Tickets and information at www.pridearts.org

'night, Mother, Invictus Theatre, zooming October 22-November 8: Marsha Norman was awarded the 1983 Pulitzer prize for her two-character examination of filial dynamics as a mother strives to dissuade her epileptic daughter from committing suicide. Tickets and information at www.invictustheatreco.com 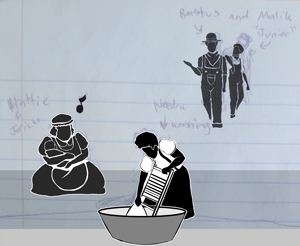 Rastus and Hattie, 16th Street Theater, audiostreaming through October 24. A break in the 2020 space-time continuum hurtles a scientist, a lawyer and their families—along with a pair of robots from 1939—into the Deep South of 1870 in this graphic-novel fable of interracial oppression in America (and you thought Westworld was dangerous!) Tickets and information at www.16thstreettheatre.org

Run the Beast Down, Strawdog Theatre, streaming to October 25: After losing his corporate job to recession and his steady girl friend to neglect, the unassuming hero of Titas Halder's solo show begins to hear marauding foxes swapping war cries in the urban-gentrified night. Is it PTSD or is the wilderness reclaiming London? Tickets and intel at www.strawdog.org

Voice of Good Hope, City Lit Theatre, streaming online to November 1. We'll have to wait until later for a biodrama on Justice Ginsberg, but in the meantime, Kristine Thatcher's play recounts the inspiring achievements of Houston-born Barbara Jordan, the first Black congresswoman elected to the Texas Senate and later, the Federal House of Representatives. Tickets and information at www.citylit.org

No Aids, No Maids: Stories I Can't F**cking Hear No More, Waltzing Mechanics, streaming October 8-November 15. Fresh from the Capital Fringe Festival, Dee Dee Batteast acquaints us with the woes of demographically under-represented actors marginalized by casting directors still mired down in outdated gender and ethnic stereotypes. Tickets and information at www.waltzingmechanics.org

Holy Ghost Bingo: God, Goblins and Fun, Nuns4Fun Entertainment, streaming to October 31. The folks behind Late Nite Catechism regale us with their re-enactment of a parish bingo night, this time featuring family-friendly fables of Halloween, Day of the Dead and All Saint's Day—the three unlikeliest holidays you'd expect to be celebrated in tandem—performed in a theater known for its real-life phantoms. Tickets and information at www.nuns4fun.com

Airport 1970Something, Hell in a Handbag Productions, streaming from October 16-November 14. In case you missed the summer drive-in version, you can still catch this disaster-film parody featuring, in addition to regulars like David Cerda—this time playing Gloria Swanson—cameos by Lance Baker, Jennifer Engstrom, Chay Yew (!), Mierka Girten and many, many more. Tickets and information at www.handbagproductions.org

The Magic Parlour at Home, Dennis Watkins, zooming in an open run. With his cozy drawing-room at the Palmer House temporarily shuttered, Watkins brings his table magic to you over live-feed facebook. Bring your own cards and drinks. Tickets and information at www.themagicparlourchicago.com

The Sorcerer's Lair, David Parr, zooming monthly from Poe's (as in Edgar Allen) Magic Theater in Baltimore's historical district, even though Parr is prestidigitating in Milwaukee. Now that's magic! Tickets and information at www.poesmagic.com

RETURNING FOR THE HOLIDAYS

Pride and Prejudice, Lifeline Theatre, streaming in November after an October break. It's not the lavish PBS version, but the Lifeline artistic ensemble of artists has been working together for nearly a quarter-century, and the addition of clever choreography and expert film-editing elevate this virtual rendering of the Jane Austen classic well above talking-head technology. Tickets and information at www.lifelinetheatre.com