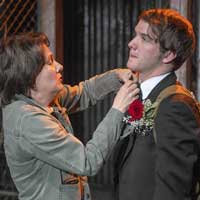 "..."Mud Blue Sky," playwright Marisa Wegrzyn's modestly scaled but exceedingly funny new play, which opened Sunday night just across LaSalle Street from the former warren of airline employees, is all about a pair of flight attendants up to no good on a layover in an O'Hare-area hotel. But this is no "Boeing Boeing" nor "Coffee, Tea or Me" memoir of zipless bed-hopping (to sanitize Erica Jong) with handsome first officers or Parisian bankers. They don't hang out on Touhy Avenue."

"...The ever-quirky West does a lovely job with the playwright's deft definitions of quitting, being fired, being laid off and just plain "stopping," which is not necessarily the same as retiring. And she mines the comedy in the horrors of motel room germs, from the TV remote to the bedspread. No one quite lights up a room like the wide-eyed Girten. And Fitzgerald, transformed by a new hairdo and glasses, brings a gorgeous turbulence to a long story about an old woman she once helped in an airport. As for Farabee, he captures just the right balance of naivete, self-possession and sensitivity to make you root for him."

"...Wegrzyn's characters are lower-middle-class grunts at the mercy of cash-strapped airlines and rude passengers who leave unspeakable messes in the lavatory. Whereas the job may have once provided fresh opportunities for womenas long as they fit a certain moldthis play's trio seem convinced they're headed nowhere."

"...Plus, Shade Murrays direction and the excellent set design by Jackie Penrod makes this a remarkable production that you really shouldnt miss. If youre looking for an interesting play with strong female characters and lots of laughs, Mud Blue Sky is a perfect fit."

"...All four actors give strong, very believable performances. West is quirky and burned out from decades of flying. Girten's Sam is flashy and sexy as she was last year in Red Orchid's Simpatico. Fitzgerald, the company's artistic director, brings warmth and humor to Angie's character. And Farabee has just the right amount of teenage awkwardness and sensitivity to generate maternal concern from the three women twice or thrice his age."

"...If that setup seems, okay, a tad contrived, Wegrzyn's apparent affection for these four flawed characters is anything but, and it's shared by director Shade Murray and his cast. In their deeply felt quibbles about the semantic difference between quitting and stopping or the relative indignity of walking backward behind the beverage cart, West and Girten draw us into their everyday worries. Farabee, a young actor who's become a favorite in pieces like Pavement Group's punkplay and MilkMilkLemonade or Theater Wit's Tigers Be Still, more than holds his own against three formidable actors with a long history."

"..."Mud Blue Sky" is the second play by Wilmette native Wegrynz to be staged at A Red Orchid, following "The Butcher of Baraboo" in 2012. While the two works share Wegrynz's wry, often dark sense of humor, "Mud Blue Sky" is more sharply drawn, taut and concise. And its comedy, though keen-edged, pervasive and often physical, never veers into the sitcom farce of "Butcher." It's the touching humanity of "Mud Blue Sky" that makes it so appealing and, ultimately, satisfying."

"...Murray makes Wegrzyn's marvelous miscellany matter. Only later do you realize that Mud Blue Sky (a title that is, like much here, whatever you make of it) plays variations on a theme of isolation. People, we never learn enough, can be good to and for each other. There's no telling when, who or why-just what. So, just wait. That's wisdom enough for 90 minutes."

"...Mud Blue Sky has the elements of a wonderful show: honest acting; spot-on comic dialogue and loads of heart and compassion. And, of course, more laughs than any other show now playing in Chicago. This show is easily one of the best shows of 2014 - it's therapy for a cold rainy spring with all those laughs. Get to A Red Orchid for a treat."

"...And again, that's the saddening thing about "Mud Blue Sky" - as with any Red Orchid production, the various elements are all first-rate. The cast is focused and committed, with ensemble members Mireka Girten and Natalie West in especially fine form, and Jacqueline Penrod's set designs and S.G. Heller's stage management do wonders with Red Orchid's relatively small performing area. If none of those skills, though, are in service of a strong play, then the results will inevitably be disappointing, as is the case with "Mud Blue Sky.""

"..."Mud Blue Sky" could have been tasteless or vulgar with its mix of a teenage boy and three experienced women in a hotel room. It's an adult work, but in the best sense of that much abused term. The play stakes out no claims as a cosmic dramatic experience and at 90 intermissionless minutes it doesn't overstay its welcome. But the blend of prickly and sympathetic writing with top grade acting creates a show that's funny, sometimes moving, and most important, believable."

"...Under the masterful direction of Shade Murray, this sublime ensemble soars.  Murray paces it perfectly.  He lets the intricate details of the people and their stories authentically evolve.  In the opening scene, Natalie West (Beth) silently performs a ritual screening of her hotel room.  The amusement has started!  Her paranoia of germs and intruders is palpable.  A zany Mierka Girten (Sam) bursts into Wests quiet zone.  The steady West and effervescent Girten talk in seasoned co-worker shorthand.  Their genuine repartee is riddled with the gossip and barbs of a lengthy relationship."