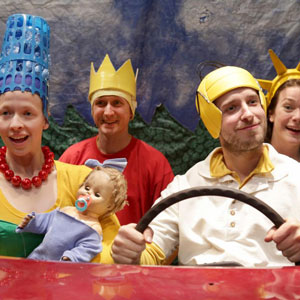 "...The production is a high-energy affair, as intended. That sustains itself well through much of the night, although sometimes the crucial emotional subtext, the quiet truths of the show, get a bit squashed by all the performative business."

"...Wechslers ensemble maintains energy throughout the shows wild ride. Everyone is double- or triple-cast, charged with playing both a Simpsons character (or two) and a survivor. As Quincy/Bart, Leslie Ann Sheppard brings the gravity of Odysseus into the petulant bombast of the yellow-haired cartoon child. Barts an unlikely charismatic leader, but Sheppard makes him heroic, somehow without dimming his obnoxiousness."

"...Being steeped in Simpsons lore certainly helps one appreciate the comic details, particularly in the makeshift costumes designed by Mara Blumenfeld and Mieka van der Ploeg. (The nesting blue plastic buckets comprising Marge's wig in the second act are particularly cunning, but it's all fabulously inventive.) But Washburn also isn't interested in delivering a straight-up parody. One of the points of her play (which features terrific original songs by the late Michael Friedman) is that our collective memories both sustain us and twist us in knots."

"...The cast is powerful with high energy and the original cast and a few newcomers have created an ensemble that is sure to be nominated for a Jeff Award for Ensemble. They are flawless. Besides Ms Sheppard and Mr. Jessop, the cast includes Jonah D. Winston ( what a powerful voice) Will Wilhelm ( a vocal range that will astound you),Eileen Doan, Tina Munoz Pandya, Ana Silva and Daniel Desmarais. The show has some wonderful musical numbers ( musical direction by Eugene Dizon, who also playes the piano with Carlos Mendoza and Scott Sedlacek adding to the trio) and choreography by Brigitte Ditmars. The fight choreography was by David Woolley, Jon Beal and Kai Young. As I said earlier, the swordfight is truly a special effect that the opening night audience loved!"

"...This show is quirky, creative and always surprises the audience with the unexpected. However, it also relies a great deal on the audiences familiarity with the humor and satire of The Simpsons. As a riff on how popular media has turned into todays mythology, inspiring memories and helping us to survive pandemics and nuclear disasters, Anne Washburns play with music is a success. This revival that seems especially timely is a fascinating, enjoyable look into the future of theatre and survival through storytelling."

"...What an amazing fever-dream has flowed from Washburn's imaginative pen, brought to life at Theater Wit. Originally mounted in 2015, it is clear why this was one of the troupe's most popular productions. It is a joy-filled moment to be back in the audience before a live show."

"...Though stacked with a cast of winners across the board, Mr. Burns just about belongs to Jonah B. Winston and Leslie Ann Sheppard, blessed with voices that come in handy as the tale evolves into opera. (Also blessedly, no one is miked, nor do they need to be.) But then, at the very end, Andrew Jessop steals the show in an act befitting the titular plutocrat. "

"...This remarkably entertaining play was one of Theater Wits biggest hits, which would make it a great choice for a revival even if it were not about society rebuilding itself after a monumental disasterwhich links it directly to the reopening of theatres after the COVID shutdown. Wit Artistic Director Jeremy Wechsler directs a very impressive cast, each of whom plays multiple roles and each of whom has moments to shine."