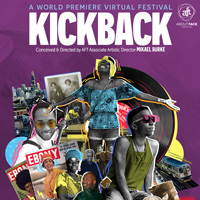 About Face Theatre at Online Stream

"...You can pick and choose your way through the nine video segments, which include music, movement, poetry, animation, and a couple of mini-playlets devised as Zoom sessions. One of the latter, Frankie & Labi Saved Us, is written and performed by Robert Cornelius and Paul Oakley Stovall and takes the form of an online therapy session between Cornelius's patient and Stovall's therapist. The two bond over their love of music: Cornelius's character was an early devotee of house music pioneer Frankie Knuckles, and Stovall's shrink was introduced to British Black openly gay musician Labi Siffre by his father-which didn't keep the old man from kicking his son out once he learned he was queer."

"...White reckoning and re-education must learn to celebrate Black excellence without trying to own or claim or appropriate it. As a white person, this festival isn't for me to review or critique-only to learn from and witness. As a queer person, I'm grateful that these artists worked to mend the erasure of much of our community's foundation. As a person in the audience, I found the KICKBACK Festival to be moving, illuminating and totally enjoyable."

"...The factor distinguishing a manifesto that could have emerged as a standard-issue hymn to gynocracy is not merely that it is authored by a man, nor that the sororal chemistry manifested by Renee Lockett, Shariba Rivers, and Anna Dauzvardis makes us want to pour ourselves a libation and join in the discussion, but the hitherto-unexplored suggestion (listen close or you'll miss it) that women-loving-women could be akin to loving oneself and "queerness just another form of empathy." Look for that to spark after-show talkbacks!"