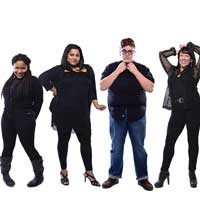 "...Based on more than 200 interviews with Chicago theater artists, the work, created by Dani Bryant and directed by Erica Vannon, is a funny, poignant and enraging exploration of size-ism, racism and sexism in the theater, and how these "isms" are deployed against women who have the nerve to try to break the boxes of stereotyping. As "Gender Breakdown" makes clear, you should not have to bind your breasts into oblivion to be a ballerina. Nor should your melanin level/body shape sentence you to a career of playing the spicy best friend/maid/third-terrorist-on-the-left. These and other timely commentaries are included in the 80-minute production."

"...With a script assembled from interviews with more than 200 local theater makers as well as personal stories from the ten performers, these presentational 70 minutes cover a litany of deeply entrenched systemic biases: hypersexualization of certain female types, exoticization of women of color, pervasive unwillingness to see women as legitimate protagonists, near total erasure of non-cis nonmales. Insightful and provocative, although occasionally repetitive (and largely blind to class issues), Gender Breakdown is more a compelling expression of outrage and solidarity than a nuanced examination of complicated issues. Director Erica Vannon's grounded cast speak with such candor they never seem to be acting at all."

"..."Gender Breakdown" is unapologetically didactic but also self-aware enough to know that what works for each individual may not be the same. For instance, one actor might refuse a role that waters down their ethnic background or reinforces white-based othering. Yet another might take the gig, if at least in part to be in the room with the people who need to hear their voice. Intersectionality means celebrating difference and recognizing that a rising tide raises all ships."

"...The smart writing from creator Dani Bryant allows the actors to educate and inform the audience about the horrific discrimination still rampant in theatre without becoming whiny or preachy. Quite the impressive feat, given that the raw statistics on female representation in the Chicago theatre scene (which were included in the program) show that there is oh so much material to complain about."

"...I may have missed the arrow to the box office but GENDER BRAKDOWNs message of limited opportunities and everyday exploitation is impossible to miss. In a heart-wrenching vignette, eager actresses ask if they change their appearance and behavior, will male directors love me now? Later we learn that I dont see you as a love interest is a casting euphemism for too heavy, too ethnic or too nontraditional."