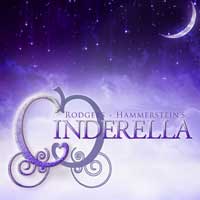 "...That music is the advantage of doing Rodgers and Oscar Hammerstein's "Cinderella" over all those other holiday shows, especially if you have a 15-piece orchestra in the pit. This musical, which began as a television special starring Julie Andrews in 1957, comes replete with the most gorgeous score. The stage version has updates ("The Sweetest Sounds" actually was inserted from a different musical) and takes care to make Cinderella's determination part of her destiny, ensuring that her future is not merely determined by the size of her feet. But Paramount's production, directed by Brenda Didier, never forgets that the Rodgers and Hammerstein songs are a key part of this experience."

"...Adapted for the stage by Tom Briggs, from the teleplay by Robert L. Freeman (and Charles Perrault's version of the original fairy tale), Hammerstein's book has been tweaked, but the story is the same as ever: Orphan girl, abusive stepmother/stepsisters, fairy godmother, ball, charming prince, midnight, glass slipper, happily-ever-after."

"...Director Brenda Didier balances sentiment and wit in this graceful production, which unfolds on Angela Weber Miller's gorgeous set framed by vines and delicately illuminated by lighting designer Victoria Bain. It all feels wonderfully whimsical, from the cheery town square, to the forest where the spectacular transformation from pumpkin and mice to coach and footmen occurs, to the elegant ballroom filled with guests stunningly costumed by Theresa Ham in shades ranging from deep purple to pale lavender."

"...Even if the songs still have 1950s slang and unfunny jokes and the script is mired in the 1990s, youre not going to care. Youre going to spend 2 hours with a group of darling, engaging performers singing and dancing their hearts out with great enthusiasm. And just let yourself get swept up into the magic of it because this production has some magic to deliver."

"...The success of this play depends on the audience Paramount is trying to reach. If it's children, then, regrettably, this production lacks the energy needed to keep them entertained for over two hours. Instead, we could hear and see several fidgety kids talking, moving, and kicking at seats, with parents frantically trying to reel them back into watching the play. Unfortunately, Paramount's Cinderella production dropped the ball by not adding thrilling moments or special effects to help parents. The animated mouse, cat, and duck were cute but only provided a few minutes of the kids' attention."

"...The Paramount Theatre in Aurora has done it again! Another musical production that is spellbinding and cast to perfection. Many of us know the work of choreographer/director Brenda Didier. Her process is always one of true creativity and with Paramount's production of "Cinderella" now on their stage, she has outdone herself on both counts. On the choreography side, Tiffany Krause is her co-choreography. Together, along with musical director Kory Danielson, they have created a musical that is astounding and delightful."

"...This is a sweet fairy tale for the holiday season, even if the script is more subdued than younger audiences might appreciate. But the slipper almost fits, and this new musical offering from Paramount Theatre will give theatergoers their moneys worth of entertainment. When Cinderella finally gets to the ball, wins her Prince and lives happily ever after, the happiness of this fairy tale will transport every little girl to the ball."

"...You might ask how the magical transformation of a pumpkin into a coach and mice into horses is handled. In this production of Cinderella a mix of puppetry and stagecraft does the trick. Puppets play the roles of mice, cat and birds who sew the gown and comfort Cinderella in her misery, entertaining accents at the Paramount production. And when at the critical moment an elegant coach and livermen appear, you will be delighted. It earned well deserved applause the night I saw the show."

"...With an emotionally accessible Prince Charming, a Mother Earth-type Fairy Godmother and a 21st century, petite-but-confident leading lady who goes after what she wants and deserves (just a chance to get to know him), Paramount Theatre's Cinderella, is the musical that'll delight all ages this holiday season."

"...In a graceful and superbly poised debut performance, Renfrow's soaring voice, arresting presence, and effortless dancing ability, anchors an all-star cast in this year's holiday offering at Chicagoland's largest regional professional theater. The timeless message of hope and resilience that the show delivers is just the heartwarming tonic that everyone needs right about now. Adapted by Tom Briggs for the stage from the 1997 teleplay by Robert L. Feedman, this edgy version has a rich and storied history. Yes, there's that brilliantly imaginative moment in Act I-the one that people in every little corner will be talking about, but you'll not get a peep out of me-during which I could hear audible gasps of wonder from youngsters of all ages. It's the beginning of a bright and fantastic journey that will make you believe that anything is possible."