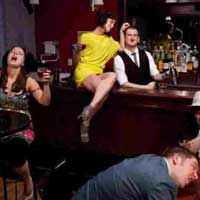 "...Preventing the evening from dissolving into chaos are a quick-witted ensemble adept at maintaining control of even the most ribald spectators ( "We are not holding auditions tonight" the biggest of them proclaims ), nor does the bibulous premise entail tactics likely to endanger vulnerable strays from the Wrigleyville district to the south on Clark Street. Teetotalers, designated drivers and just plain unthirsty revelers may enjoy their soft and fizzy libations with no fear of harassment or ridicule. Indeed, the production company's record of support for the American Liver Foundation attests to its safe approach to recreational imbibing. Bottoms up!"

"...But when you get down to it, this is really just a solid hour of comedy that happens to be about booze. Still, that's a pretty big "happens to be." As winning as it is, without that hook it's doubtful that this show would still be running to sold-out audiences after seven years (and expanded into five other cities as well). That being said, "Bye Bye Liver" doesn't just coast on its history-this very funny ensemble works to sell every joke, truly explores and responds to the audience interactions and even drinks with the audience in the lobby after the show. That's dedication. Or alcoholism."