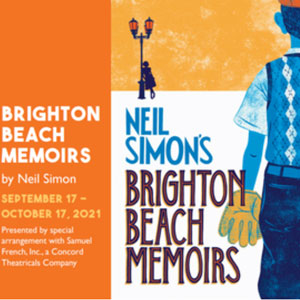 "...Phelps' cast earns kudos not just for landing laughs in all the right places, but for striking the right emotional notes, particularly in the scenes between Mulae's earnest Stanley and Berlatsky's garrulous Eugene, which reflect genuine warmth. That's also true of the affecting scene late in the second act between Castle's Kate and Lee's self-doubting Blanche who resolves at last to claim her place as the head of her family."

"...Under the amazing direction of Scott Phelps, who truly shows his understanding and love for this piece, with a near perfect set ( Eric Luchen capitalizes on the space that Citadel has, using every inch to perfection) and with a powerful cast headed by Siah Berlatsky as Eugene, our story-teller and hero. What a find! He is captivating in this role where he must converse with the audience and within minutes, has them eating out of his hand."

"...Neil Simon's charming autobiographical comedy, the first in his trilogy that includes "Biloxi Blues" and "Broadway Bound," is a wonderful, warm welcome back to live productions at the Citadel Theatre. It would be sublime if Scott Phelps were to include these other two comedies in subsequent seasons, along with additional Neil Simon shows. This year's offerings continue with the charming musical, "You're a Good Man, Charlie Brown," the heartwarming romantic comedy, "Outside Mullingar," and the wacky, surreal Steve Martin comedy, "Picasso at the Lapin Agile." At long last, live theatre has returned to Chicagoland!"

"...Standouts include his put-upon mother Kate, played by Monica Castle, who carries the weight of everyone's problems and must convey a range of raw emotions. She does so with great style. Ron Quade as patriarch Jack, who everyone relies on, plays his role with power, heart and a little bit of vulnerability"