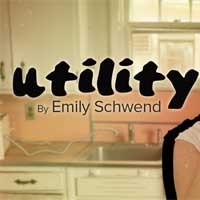 "...The event around which the story revolves is an eight-year-old girl's birthday party, but its dramatic peak comes before the cake is brought out, when Jim awkwardly attempts to tell Amber how he feels about her. Schwend is very good at giving voice to characters who are barely verbal. The evident pain with which Jim struggles to express his emotions is the heart of the entire play. By keeping things bottled up, rather than exploding into melodrama or tragedy, the quiet desperation of these people is all the clearer."

"...Louisiana-born director Georgette Verdin, however, does not flinch from Schwend's examination of inert misery, nor does she allow us to do so. Brynne Barnard as the stoical matriarch and a trio of supporting actors assembled for Interrobang's midwest premiere inhabit their personae with unconditional compassion and not a hint of condescension, while the technical team of Kerry Chipman, Adam Borchers, Michelle E. Benda and Erik Siegling immerse us in a full-service kitchen where the chirping of crickets outside the window or the hum of a refrigerator switching on after a power failure can prompt relief commensurate with an angel choir, along with, perhaps, the courage to face another day."

"...This show is naturalism incarnate and the quiet beauty is unsustainable without the boredom. While the acting work is well-performed, there's only so much to do with the quotidian when you're restricted by the schedules and the bills, by the fridge and the kitchen table. It's an hour and forty minutes of schedule mishaps and the power outages, punctuated by wells of contemplation and small dramas. That's a little too long for not too much happening."

"...Ultimately, I dont think the story of the play will (should?) be a shock to anyone who has been paying any kind of attention to the world lately. Being poor is extraordinarily difficult, and its harder still for women and mothers. That said, while I dont think Utility offers too much in the way of new information on that topic, as a character study, I think it works very well. In Barnards hands, Amber shines through. She is tired, but not broken and for her performance alone, Utility is worth seeing."

"...Brynne Barnard's characterization of Amber makes the play worth seeing alone, and the supporting roles are heartfelt and convincing. The scenery and props designed by Kerry L. Chipman are remarkable and draw the audience in to the low-income home before the actors set foot on stage-the dingy wallpaper, the plastic imitation-marble kitchen table, the used toys on the floor-all are purposeful and further the plot and the character's struggle to make ends meet."

"...Director Georgette Verdin treats this all with perfect compassion, allowing Amber the time to complete all of the chores she has to do and navigate her iffy marriage while acknowledging that nothing is never going to be enough. Verdin notes in the program that Amber reminds her of her own mothers difficult daily grind. Like Ambers kids (who never actually appear in the play), Verdin may not have understood all her mother did back when she was young, but now she is in position to honor her mothers laborand the labor of all of the anonymous women (and men) who struggle daily just to make ends meetwith this play. Perhaps celebrate isnt a bad word after all; they deserve it."

"...UTILITY is an especially good match for theater lovers who treasure slice of life realistic scripts. If you are seeking escapism, this is not your show."