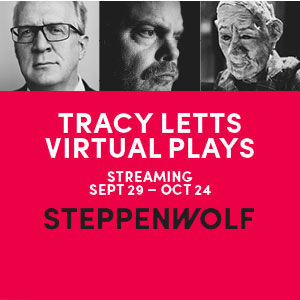 "...Each of the three works is well-written and -performed, as one would expect from Pulitzer-Prize-winner Letts and Steppenwolfs creative team. But I found the final one, The Stretch, directed by Anna Shapiro, to be the best of the threeand a gripping story."

"...Many will likely agree that the piece de resistance in this trio is the fifteen-minute finale, The Stretch, not only written by Letts, but performed by him as well. He is a racetrack announcer, with voice cadence following the noses ahead, lagging behinds, to photo finish penultimate finales-plural. These racehorses refuse to quit, and no finish line is ever the finish, it seems. SPOILER ALERT: the comical conceit of the story, is in the crack-you-up racehorse names, at once similar to the real-world typical and yet able to tell a story in their interplay. Among others, one horse is named A Horse Called Man, another is Canadian Navy (which predictably isn't going anywhere), and then there is My Enormous Ego, which gets destroyed on the side of the track and trampled upon, with nobody quite noticing as the race continues. BRILLIANT!"