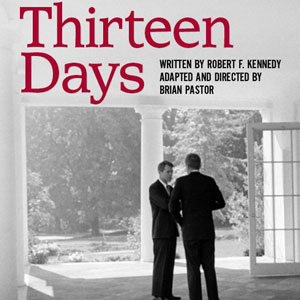 "...The focus never deviates far enough from the main players' own confident standpoint to suggest very much insight has been applied to what makes these figures either the best or the brightest. Aside from a wily ambassador and a clownish delegate at Adlai Stevenson's address to the United Nations, the Soviet enemy is a Cold War-esque faceless one, to say nothing of the missing Cuban perspective. Like the furled flag in the corner of set designer Jeremy Hollis's stage, the glory of these highly decorated overlords of ours is presented as self-evident. You don't have to like them, and it's not up to you whether they're right or wrong; you're simply supposed to salute them and then sit back down. Despite fine performances from many in the cast, particularly Kat Evans's energetic turn as Bobby Kennedy, the play suffers for never taking the time to justify the implicit grandeur of its esteemed company of suits."

"...No one can deny the role that myth plays in determining assessment of our country's past, and how open we are in 2021 to learn how the sausage is made remains to be seen. In the meantime, we should savor such oft-overlooked moments as when Adlai Stevenson recounts a humorous fable ("attributed, as many of our stories are, to Abraham Lincoln") to a Soviet ambassador whose amusement at the punch line occurs only AFTER receiving its translation. In the midst of just such drollery are the fates of nations decided."

"...By incorporating speeches and dialogues from recently-made-public transcripts of JFK's strategy sessions into his script, Pastor highlights President Kennedy's keen ability to quickly get to the heart of important geopolitical matters and negotiate competently with Premier Nikita Khrushchev and the (former) Soviet Union. But unlike two world-class movies that brought this behind-the-scenes discussion into the public eye, there is major twist to this production: Every one of the powerful white men in the President's "kitchen cabinet" is being played by a woman!"

"...Adapted for the theatre and directed by Brian Pastor, City Lit's Resident Director, this production features a cast totally comprised of women. While all of the characters in the book are white males, this ambitious twist creates a unique reflection of gender issues in the body politic."

"...Though Robert Kennedy's book (and historical fact) show that the committee guiding the President was comprised of all white males, Pastor's cast (multi-ethnic in addition to all-female) feels completely genuine. Led by Cameron Feagin (as JFK) and Kat Evans (as Attorney General Robert Kennedy, who also provides narration), the eleven women in this group, guided by Pastor, keep the audience riveted for the entire 95 minutes of the play. Even though, of course, we already know how it plays out, somehow that outcome feels in doubt."

"...For ninety minutes, even though we know how it all works out in the end, we sit and saturate the anxiety of the moment. All memory of how the crisis was averted in the real world is forgotten as writer and director Brian Pastor, City Lits Resident Director, locks us in the boiler room of highwire suspense of those thirteen days. Its agonizing painwe feel it."