The Best Decision You've Ever Made Reviews 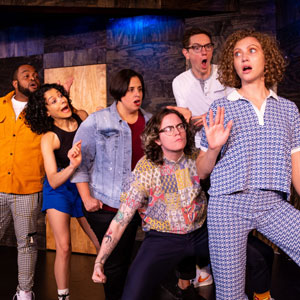 The Best Decision You've Ever Made

"...And the uncommonly smart e.t.c. Stage cast, directed by Frank Caeti and made up of Atra Asdou, E.J. Cameron, Mark Campbell, Laurel Krabacher, Alex Bellisle and Chuck Norment, has the talent to offer plenty of laughs. What's lacking here are two things: sufficient confidence to commit to the material and an understanding that comedy has to be at least as much about the audience as the performer."

"...Pinning a show on its personalities could have been risky, but it works when the players are so appealing - witty and expressive across the board, giving off that vibe of being stars in the making."

"...The six performers share the writing credits, but cheers to director Frank Caeti for his invaluable guidance in giving the show its pace and shaping the individual bits into a delightful flow. Musical director Tilliski Ramey is responsible for the musical accompaniment that contributes so vigorously to the programs high energy."

"...One of the aspects that added to the hilarity and part of what I thought made the show as entertaining as it was, were the audience suggestions to the acts; picking the music, setting, and personas. Performed and written by returning ensemble members Atra Asdou, EJ Cameron, Mark Campbell, Laurel Krabacher, and Chuck Norment with new cast member Alex Bellisle, seamlessly improvised the audience's choices within the scene. A funny cast, the audience along with my guest and I giggled and laughed throughout the whole show."

"...The Best Decision Youre Ever Made doesnt live up to She The People, Girlfriends Guideline To Sisters Doing It Themselves. However, because the ensemble members are talented, audiences will still have a great time laughing during this two-hour improvisational comedy."

"...Is the new ETC show a rock solid comedy? Probably not as much to us as it is to the 30 somethings, but it is funny and when audience members yell out things for the actors t incorporate into their skits, it is fun to watch the creative minds reach for ways to use the products, or foods or jobs that the audience members shoot out as responses. This they did well, and even when they had a few moments of "breaking-up" we enjoyed struggling with them to finish what they started. That is the beauty of "improv" and when I attend a show, I always think about the cast members and which ones might one day fit as new arrivals on SNL (Saturday Night Live). This show has two!"