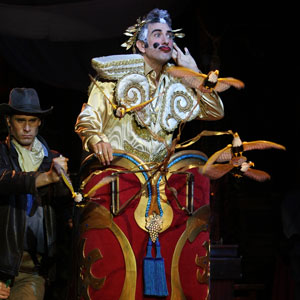 "...The circus is a fine healer right now. It operates under its own rules and it long has celebrated the diversity of its audiences even as it encourages people to see people from all over the world united by their skills, not their differences. Especially with Ferrante in charge, the vibe of the show is very much, have fun and see what you can do. Still."

"...ZinZanni originally opened back in July 2019 only to fall victim, along with the rest of the theater world, to COVID-19 pandemic shutdowns the following year. Certain key elements - namely Ferrante and master clown/co-director Joe DePaul - remain intact. The rebooted and retooled acts are fantastically over-the-top and more than diverting enough to make you momentarily forget we're emerging from a pandemic. Truly, there's nothing like top-drawer aerial artists, contortionists, a one-person ode to King Kong, a golden chariot pulled by fluttering doves, a couple seducing each other with lettuce, and a pie floating in extreme slo-mo toward an unsuspecting Cleopatra to take your mind off your troubles."

"...The greatest treats of the evening are also its greatest feats-dance and acrobatics by Duo 19 (Parkinson and Cutler), Bajazet and Vita Radionova, and Lea Hinz-performed at such close range, you can see every supple muscle quiver and track the calculations of coordination. Impossible distillations of physics, ingenuity, and craft keep bodies hovering between flight and fall-exquisite illustrations of trust in humans and human invention, radiant, perilous, tilting extravagantly on the edge of folly, mastery of this moment. (Between the acts, these same performers bring you plates. They pepper your food. They pour your water. It's not new but still needed: a reminder of the life of service that many artists lead.)"

"...The show is filled with magical moments ( some even with magic), extraordinary feats, song ( an amazing Storm Marrero with a voice that makes the building move-) comedy, Joe De Paul ( co-director) is hysterical as he takes on the role of King Kong in a skit that will make a lasting impression ( if you are of an age to recall the Empire State Building scene)."

"...Throughout the farcical rhythms of the show, comes wave after wave of astounding circus-which has a great impact due to the closeness of the performers. Performing in such a glamorous circus space like the Spiegeltent Zazou means there is no fourth wall, and the frequent involvement of audience members in the show breaks that down even further. We're all family there...there is (seemingly) no boundary between you and that half-naked Greek god in front of you. Just don't make eye contact if you don't want to get pulled up on stage and be an even bigger part of the show. But still, when you see a woman (Cassie Cutler-half of the Duo 19 partnership) walking on bottles 12 inches away on your actual dinner table, or when an aerial act swoops a few feet from your airspace, you can't help but feel involved."

"...Teatro ZinZanni's exciting new production in the Spiegeltent ZaZou on the 14th floor of the Cambria Hotel in the Chicago loop is the first show that has opened downtown in the almost-post-COVID-19 era and there were a surprising number of folks in attendance all eager to be entertained. The show, conceived and directed by Norman Langill, is a theatrical experience that draws from several European and New World traditions of commedia dell'arte, vaudeville and burlesque, and is a one-ring circus with sketch comedy, magic and even a bit of Ed Sullivan's format. The entertainment variety is intense and quite a feast for the audience's palate that, along with the sumptuous dinner and drinks, make for a high-flying evening all around."