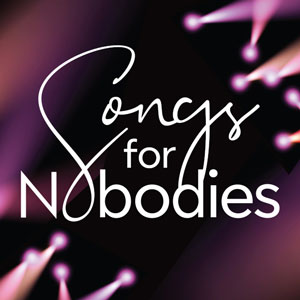 "...The title of the show refers to the organizing principal which views these divas through the lens of ordinary people who somehow encountered them (a washroom attendant, a feature writer, a librarian, a backup singer, a maid). Thomas has to play all of these characters, whose first-person monologues provide a narrative context to the show and solve the problem of dull biological repetition  and then sing the songs. The assignment doesnt require impersonation of these stars, but it certainly necessitates their evocation."

"...Director Rob Lindley cast the roughly 100-minute, one-woman musical by Joanna Murray Smith well. Thomas is equally powerful belting alto-fueled, blood-in-the-water blues and piercing the soprano stratosphere with the most delicate of operatic arias. "Songs for Nobodies" gives her a chance to stretch every last vocal and acting muscle in that formidable range."

"...Thank your lucky stars that Chicago's own Bethany Thomas stars in Northlight Theatre's local premiere of "Songs for Nobodies." Without a powerhouse performer like Thomas at its center, there would be no reason to stage this engaging one-woman show."

"...As noted, Songs for Nobodies requires all ten of these women to be performed and sung by a single actor, and Northlight's production is blessed to have Chicago treasure Bethany Thomas as that actor. Thomas did this show at Milwaukee Rep three years ago in their small cabaret space. Here, under the adroit and subtle direction of Rob Lindley and with the nimble music direction of Andra Velis Simon and three other (unseen) musicians, Thomas makes Northlight's larger space at the North Shore Center for the Performing Arts feel like a cozy nightclub. Jesse Klug's low lighting captures the shadowy side of these women's emotions, but the atmosphere never feels totally bleak or chilly."

"...Audience members for whom it's not enough that Bethany Thomas paints vividly empowering portraits of these witnesses to glory, rendering each personality whole and differentiated with the twitch of a shoulder or extension of a vowel (dialect instruction by Eva Breneman), Murray-Smith's narrative also ensures our familiarity with the "Somebodies" lending our "Nobodies" their claim to distinction by requiring her narrators to replicate such signature anthems as "Come Rain or Come Shine," "San Antonio Rose" and, more significantly, "Strange Fruit." The versatile Thomas confronts this challenging mimicry with spot-on accuracy, from Piaf's chesty croon to Holiday's kittenish whine, capping off the evening with a plaster-your-brains-to-the-ceiling rendition of Puccini's "Vissi D'Arte" in a vocal display exceeding the hitherto-assumed capabilities of a Broadway-belter. Who's a "Nobody" now?"

"...Under Rob Lindleys understated but sure direction, Thomas smoothly melds from segment to segment, always sustaining the viewers attention as she moves from segment to segment. After singing in four pop music genres, Thomas ends the show with an aria from Puccinis tragic opera Tosca that demonstrates a vocal power that had the opening night audience roaring."

"...Bethany Thomas is a gift to the world of entertainment! There, I said it! Chicago ( and Milwaukee) audiences are familiar with Ms Thomas. We have seen her grace many of our area stages, but never like you see her in this tour-de-force performance now on stage at Northlight Theatre in Skokie. The piece is called Songs For Nobodies by Joanna Murray-Smith, directed by Rob Lindley with musical direction by Andra Velis Simon. This is two hours of captivating stories and music with a performance by Ms Thomas that will hold you spellbound for the two hours ( no intermission, and I didnt care) she graces the stage."

"...But with her bravura one-woman performance in "Songs for Nobodies," Australian playwright Joanna Murray-Smith's exceptionally clever and monumentally demanding musical theater work about the complex nature of that state of being - Bethany Thomas, the multi-talented actress/singer who has appeared on most of Chicago's major stages throughout the past two decades, has clearly found the kind of star turn that can change a career, and a life, while unquestionably generating immense happiness, awe and bravos among her audiences."

"...Being a one-woman production, the challenge of creating ten three-dimensional characters is clear and daunting. Enter Bethany Thomas, who breathes life into this piece in a caliber all her own. Versatile and quick-witted, Thomas embodies her roles with resonant investment, flipping between roles on a dime regardless of dialect or voice type; seeing the breadth of her range is worth the price of admission by itself. The tour-de-force of her performance is nothing short of extraordinary."

"...For the second time in as many weeks, I found myself in a theater so consumed and satisfied by a live performance that I actually closed my eyes for a moment just to listen. What I heard was the rapturous voice of Bethany Thomas, channeling the enigmatic Billie Holiday in a spot-on rendition of "Ain't Nobody's Business If I Do." It is one of five encounters with greatness that are richly told in Joanna Murray-Smith's "Songs for Nobodies" now playing in a stunning production at Northlight Theatre."

"...It's not the divas though who are so engaging, in this writer's view. Rather, it's the parade of personalities that are the nobodies touched by these divas. Thomas seamlessly moves from diva song to each vignette's narrator, sometimes with help from Lighting Designer Jesse Klug but often just with a change of accent and posture. We come to know the interior life of the woman in the posh ladies' room on standby to hand out towels, an early female reporter trying to find her way in a man's world, a nanny who today would wear a #metoo t-shirt, and more."