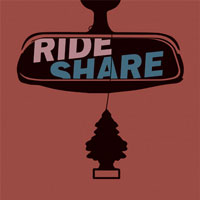 "...Marcus doesn't dive into the ride-share gig with feelings of great hope, but with a clear determination to make a success of it for the sake of his adoring wife and the demands of their debt. He sheds his power suit for black sweats and obsesses over his ratings, which director Simeilia Hodge-Dallaway expressionistically visualizes with large, cut-out numbers raining down on Marcus's head."

"...There is no way that this particular show would work on a stage, unless major changes would take place. I am sure that we would have to have the other characters ( like "Hellcab" did back in the late 1900's). What we see in this one many show is one hour and twenty-five minutes of digging deep into the man himself. His dreams, his happiness, his sadness, his ups and downs... in other words, his life! We also learn more about how a black man sees other people responding to him and get a feeling for the life of a shared driver who experiences that of each passenger at least for a moment or two."

"...In the third of three exceptionally fine virtual productions from Writers Theatre, this riveting, powerful one-man drama is the shining jewel on their crown. It's a heartbreaking story told by Marcus, a 33-year-old African-American man, who's just trying to make ends meet, earning a decent living and attempting to survive the hardships of the modern world. This 80-minute one-act, written by talented playwright Reginald Edmund, will captivate and hold your attention until the very last gut-wrenching moment."

"...Kern's fable was constructed as an ensemble narrative, its enigmatic coachman's various encounters offering a mosaic of the urban squalor lurking beneath the festive cheer, but while Reginald Edmund's odyssey, Ride Share, features many of the same monsters-chiefly, passengers displaying hostile rancor, poor hygiene, or impaired impulse-control, who take advantage of the intimacy engendered by solitude in close quarters to presume a misguided familiarity with their reluctant host-we remain firmly grounded in the loneliness of the long-distance chauffeur struggling against fatigue, boredom and the nihilistic demons who cry out to him from centuries of oppression to avenge the injustice inflicted thereupon."