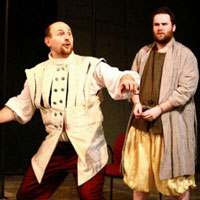 "...When the topic of dramatic debate is the quality of mercy and humane enforcement thereof, we must consider carefully the different sides of the question. But while the mostly young thespians of the Promethean Theatre Ensemble exhibit impeccable enunciation and phrasing, director June Eubanks has allowed them to wholly ignore character and subtext, making for rote recitations bearing no resemblance to spontaneous utterances of recognizable personalities."

"...Measure for Measure is one of Shakespeare's funniest and most underperformed comedies. In its thoroughly charming current production, the Promethean Theater Ensemble offers a boisterous take on the play's central preoccupation: the impossible task of regulating sexual conduct with firm, enforceable laws."

"...The unsettling tonal range of Shakespeares dark comedy makes it a tricky choice for a company, like Promethean, embarking on the Bard for the first time. (Steppenwolf hedged its bets this season with The Tempest, after all.) While the company deserves praise for tackling this rich and difficult text, the results are unrewarding."

"...Measure for Measure is a tough Shakespeare piece to get right and this hard working cast delivers a fine evening of theatre. Promethean Theatre Ensemble continues to grow as artists. This production is another move upward for them. It is nice to witness an ensemble taking their craft seriously."

"...Chicago is a city filled with incredible productions of Shakespeare's plays, both grand and intimate. Promethean Theatre Ensemble is a promising company with talent and determination but their "Measure for Measure" is not quite there yet. Hopefully they will stay the course and make better choices for material that more closely befits their dramatic resources."