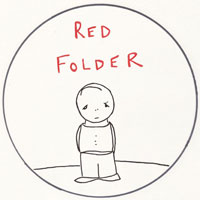 "...Since Joseph is one of the nations most successful playwrights, you might speculate that the ending will be an affirmative one. But the red folders of our lives (my equivalent is a spiral notebook that a teacher used as a flying weapon, but thats another column) can prove both resilient and as able to shift shape as any Spriggan, Naga or Lagahoo."

"...Any description of Red Folder  which has been winningly animated by Christopher Huizar, and filmed and edited by Joel Moorman  might make it sound like just a quick virtual doodle. Yet it turns out to be a surprisingly vivid evocation of just how destructive a bad teacher can be, and of what it takes for a little human to recover from the emotional scars left by such an early, damaging experience."

"...We meet our narrator in the first grade, where the teacher hands out folders to each student for the purpose of collecting their work assignmentscorrectly finished ones in one pocket, and those containing errors in the other. As our hero struggles to overcome a persistent spelling glitch impeding successful completion of the tasks, however, the inanimate agents of his humiliation begin to verbally chastise him for his imperfections."