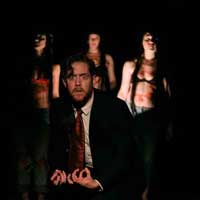 "...Their scenes remain creative respites throughout. But virtually everything else here is built around an elementary opposition-false facade vs. savage reality-that first grows tedious and then, given the technical shortcomings of some of the players, ludicrous. It's telling that in Bigot's hands Shakespeare's briefest tragedy comes in at three hours."

"...Bigot's best work as a director comes in moments where characters fight the intangible. He is wise to have Macbeth grasp at a knife that does not exist, and then to have Mulhem whirl around the stage to keep from getting cut by his invisible foe. Likewise, the parade of kings that Macbeth sees under the tutelage of the witches happens in his mind's eye, which allows the audience to take heed of his growing paranoia and psychosis. Moments such as these make for a hallucinatory experience. The audience is Macbeth's ally throughout; he speaks to us more than anyone except his wife. But he also sees what we cannot, thus proving there is uncertainty in our relationship. Is Macbeth inspired by false prophecy? Is he mad? Or is he seeing true events that will come to pass? We can never know."

"...Performative gimmickry is hardly necessary for a play like Macbeth, with its timeless depiction of the unholy trinity of evil, madness and power. Despite its flaws, this is a must-see production in an election season that often feels like a real-life Halloween horror show."

"...The chemistry of the cast was certainly a plus in pulling off some of the most complex scenes including the ending fight scene between Macbeth and Macduff."

"...You can lick your November 9 wounds as the political pundits on the airwaves keep loading them with salt, or you can make your way to Chopin Theatre for a far more entertaining and pithy bottling of l'etat americain."