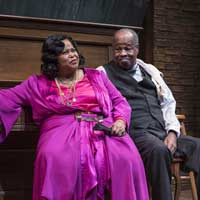 "...the pleasures of seeing Fields in this role are considerable, as is the chance to experience the work of truly great Chicago actors like A.C. Smith (who plays Slow Drag) and Alfred H. Wilson (who plays Cutler), both men who knew Wilson well and have, over the years, developed an ability to exist inside his plays with a profoundly moving veracity, each and every time. Youll also surely appreciate a very potent performance from Jalen Gilbert, playing the stuttering Sylvester, a young man desperately trying to hold on to Mas coat-tails and fire off the one shot anyone ever is likely to give him."

"...Chicago actress Felicia Fields, who received a Tony nomination for her performance on Broadway in "The Color Purple," delivers again as the title character in the Writers Theatre production of August Wilson's "Ma Rainey's Black Bottom.""

"...A clutch of Chicago's most accomplished actors, among them some old hands at Wilson's so-called Pittsburgh cycle of 10 plays, create the impression of a living portrait; and Parson is the artist holding the brush: an absolute master of Wilson's dramas who invariably finds the texture and density, the personality and pitch that define each installment. Typical of the director's approach to these plays, "Ma Rainey's Black Bottom" possesses a conversational ease, a permeating fluency. We are peering in through an open window."

"...Let's Play 'Highly Recommend' that you check out this visceral American classic drama that reveals the struggles of African American entertainers with the unexpected climax at Writers Theatre."

"...There is no question that August Wilson was a genius. His works that composed the "American Century Cycle", brought the inner feelings of the African-American during those decades to light for many an audience who neither experienced or knew the plight they were experiencing. His stories, ere ones of real experiences, and in many cases were about real people who lived during these trying times. While his focus was on Pittsburgh, one of his plays, "Ma Rainey's Black Bottom" takes place in Chicago, in a recording studio, where we learn a great deal about how the White producers used the Black entertainers to sell records."

"...I cant spend a whole review talking about how good a writer August Wilson is. How hes the only close-to-naturalist playwright who sees the thread tying our world to something more vital about humanity. Its not just that hes an expert percussionist or biographer of the fictive. He goes beyond craft, tying sculpted, tragic psychologies to behavior and turning his characters into symbols without denying their humanity. It would be insulting to speak exclusively of that sublime writing when director Ron OJ Parson and the ensemble of Ma Raineys Black Bottom at Writers Theatre threaten to burn down the house with a fiercely balanced cast of actors."

"...Director Ron OJ Parson has orchestrated the voices of his exceptional cast to perfection so that each character's "arias" don't just grab the spotlight but serve as a vivid reminder of Wilson's ability to air many viewpoints and use his uncanny ear for capturing the inherent music and variety in African-American speech. As it happens, he was his own best composer."

"...This is a stupendous production, written by one of America's stellar playwrights and directed by one of Chicago's finest directors. While there's not many songs sung in this play, it's the music of August Wilson's words that float in the air and hit home. Director Ron OJ Parson has assembled a magnificent, multitalented cast, supported by a talented crew of theatre artists who've vividly supported his artistic vision. This is a not-to-be-missed production that will absolutely inform, entertain and inspire."

"...August Wilson's plays demand to be heard; there's a musicality to his dialogue, and a real weight to the experiences essayed by his characters. There's something that feels particularly Chicago about these plays; of course this one is in fact positioned in Chicago, and Wilson's plays were often tried out here before heading to New York. (2003's Gem of the Ocean even premiered at the Goodman-that theatre has staged all 10 plays at least once.) But Chicago actors and directors, with their hearts laid bare, with their workaday commitment, with their gut-punch humor and endless enthusiasm, manage to mine something uniquely prescient from Wilson's work. I felt that when I saw Congo Square's Jitney last year. And I certainly felt that during the standing ovation after Ma Rainey's tragic finale. Parson and his cast at Writers have done this titanic work real justice, in a production filled with as much joy and sorrow as the Blues itself. "

"...To see August Wilsons plays is to look through a window on the life and times of black Americans, to feel their frustrations, challenges and desires, not just in one period, but in 10 decades of the 20th century. To witness actors tell those stories is to hear Wilsons ear for the cadence and poetry of language."

"...One of the many inspiring and uplifting messages of this stirring production is that it would be "an empty world without the blues." When Fields proceeds to prove Ma's point and dazzle us vocally in an electrifying performance, we are literally transported back to a moment in time when the oppressive racist attitudes against generations of African-American entertainers were momentarily stripped away and what was left, and which endures today, is Ma Rainey's soaring musical legacy."

"...Wilson's script uses the historical "Mother of the Blues" Gertrude Pridgett (aka Ma Rainey) - one of the first major black recording stars - to tell this fictional story of black musicians and the white men who pay pennies to extract gold from their mine of talent. Scenic designer Todd Rosenthal's set reflects the primitive technology of the era, its small sound booth above and a few bulky microphones below. In this humble space, director Ron OJ Parson unspools the complex dynamics of music, race, money, sex, religion and the meaning of life itself."