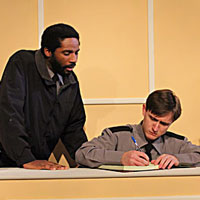 "...Performance-wise, this thing is split down the middle. Michael Pogue gives an honest and layered performance as a principled security guard trapped in a moral dilemma, and Eric Hoffmann is just right as a square-jawed cop who is despicable and yet precisely the kind of man you want around when trouble breaks out."

"...Blue police lights were flashing just a block away as I pulled into a parking spot on Bryn Mawr Avenue recently. I was headed to Redtwist Theatre, where Lobby Hero, Kenneth Lonergans endlessly provocative and entertaining morality play, is now receiving a crackerjack production."

"...The cast give intimate, honest performances under Keira Fromm's imaginative and detailed direction. I felt like I was sitting in the lobby, eavesdropping, rather than watching a play. Andrew Jessop, who brings a quirky spontaneity to his portrayal of Jeff, designed the inventive set, which transforms an Edgewater storefront into an upscale Manhattan high-rise. Street traffic, viewed through the storefront's windows, adds to the ambience."

"...Lobby Herorealistic and intimate, with a small cast of carefully drawn charactersis the perfect sort of play for a storefront theater, and Fromm has made an even greater advantage out of the setting. The set designed by Jessop turns the whole room into an apartment building lobby with the mid-century décor surrounding the audience on all four walls. In a further bit of environmental design, the storefront windows are entirely uncovered. This not only allows the audience to look out on busy Bryn Mawr Avenuea believable surrogate for a Manhattan streetbut a number of the scenes between Dawn and Bill are actually played on the sidewalk right outside the theater door. The actors are visible to the audience through the window and their dialogue is miked into the theater. These outdoor scenes go on somewhat longer than we might like, but they're effective nonetheless and give an added shot of realism when the actors react to real-life passersby on the street."

"...Keira Fromms solid cast rises to the occasion, for the most part, juggling small talk, inquisition, wishful thinking and meaningful silences. A few opening night jitters threatened to derail Act II, when compassionate exchanges between Jeff (Andrew Jessop) and Dawn (Maura Kidwell) lacked the necessary gravity. Eric Hoffmans smirky, disciplined portrayal of Bill, the shows most outwardly arrogant character, becomes the most fascinating piece of the puzzle. Hell lean on a system that rewards him, no matter who gets harmed. And hell pay the price."

"... The performances in Fromms staging are generally as sensitive and nuanced as the script, but with one glaring misstep: the casting of Jessop as Jeff. Though skilled, the actor has a brainy, tightly wound demeanor completely at odds with the characters laid-back indolence. Kidwell, however, is damn near perfect, contributing an unexpectedly moving take on Dawn as a tenderhearted person trying desperately to look tough."

"...Lobby Hero is an intelligent work that moves from a contemporary comedy into a mysterious morality drama about personal responsibility and truth. This show is well worth seeing."

"...Redtwist does white hot drama in a tiny black box with a little red twist and in this production they do so to perfection. The sound and music by Christopher Kriz, the lighting effects by Christopher Burpee, the costumes by Joelle Beranek and even the props by Joel Lambie all help to complete a show that is exciting to watch. The characters feel real and as I stated earlier, the situation and the way this production is staged truly makes the audience feel as if this is indeed happening live! ( I dont mean live acting, but rather, that it is taking place as we watch. To get an opportunity to see this special evening of theater for yourself, and you only have until January 2ndto do so ( unless they can extend), I suggest you call 773-728-7529 or visit www.redtwist.org right away."

"...Kidwell generates laughs simply by playing an impeccable straight woman in Dawns growing relationship with Jeff. But Jeff hardly knows with whom he is dealing as he flirts with Dawn or wisecracks at Bill. By the end of the play, he learns full well just how little power he has in this dynamic. Lobby Hero relies upon ever-shifting circumstances to underline the ambiguity of making moral choices. Basically it comes down to this: when can the little guy tell the truth? When its safe for him to tell it. Its a hard lesson in discretion to learn. No doubt, other late-night guys have had to learn it."