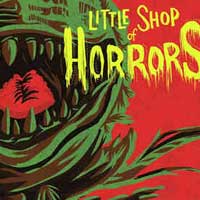 Average Rating based on 13 reviews

"...I've seen Cameron work a great deal, and she's especially at home in what you might think of as the quirky lead, roles that exploit her comedic and emotional talents and that don't push her too far in either single direction. Audrey is a sweet spot for Cameron - and it is a huge pleasure to hear her sing the show's famous knockout ballads, which she sends halfway to Wrigley Field, without sacrificing their charm or veracity. It's a terrific performance - for which Mahler mostly makes way, charming as he always manages to be. Kaplan is similarly, nebbishly, generous."

"...Now, in a fast-paced, zestily sung revival by American Blues Theater, director Jonathan Berry and his cast highlight the Faustian bargain that (quite literally) eats away at the heart and soul of the story. And if you know anything about Berry - whose predilection for dark tales about emotional and financial inequities is well-established - this should come as no surprise. The show, under the galvanic music direction of Austin Cook, and with performers who can wrap their formidable voices around ballads one minute and then belt out the most ringing rhythm and blues number the next, asks this timely question: What price are you willing to pay for success, whether its seductions come in the form of celebrity, wealth or, most crucially, love?"

"...Howard Ashman and Alan Menken's 1982 musical is so cleverly, efficiently, and tunefully written that a quarter of it can get glossed over-as it does in this American Blues Theater revival-and you've still got a good show. Director Jonathan Berry unwisely transplants an early 60s skid row, where lifelong schmuck Seymour finds fame, fortune and ultimate ruin nursing a bloodthirsty, soul-singing alien plant, to the late 60s, making the show's sly Kennedy-era naivete feel incongruous."

"...Now some will welcome seeing Little Shop of Horrors so up-close on an intimate scale. But others will wish that director Berry's production had more room to breathe and burst forth with a bigger quotient of camp."

"...Dara Cameron dominates the proceedings as a big-voiced, daringly brunette original Audrey, the shopgirl after whom lovesick Seymour (Cameron's real-life husband Michael Mahler) names his botanical discovery; you can tell she relishes the opportunity to belt such clever favorites as "Somewhere That's Green" and "Suddenly, Seymour." Mahler traffics nicely, if more quietly, in nerdy charm, while the chorus of commentating street urchins-Jasondra Johnson, Camille Robinson and Eunice Woods-command their roles. Overall, Berry's staging feels a bit unnecessarily safe for those used to seeing him find new ways in to classic musicals. But if this Little Shop doesn't stock much new inventory, it's still worth checking out its wares."

"...From the moment the actors step onto stage, Little Shop of Horrors takes you on a fun and exciting ride. The heart of the show is Seymour (Michael Mahler), an impoverished orphan living on "Skid Row", who works at Mushnik's, a florist store."

"...Thanks to set designer Grant Sabin, the little shop itself is a marvel of make-believe, transforming, as recklessly as the action, from a floral dump to an arrangement emporium for uptown slummers. Izumi Inabas class-conscious Eisenhower Era costumes and Heather Gilberts tabloid-lurid lighting continue the spell, and Christopher J. Neville and Sarah E. Ross deserve pointed praise for the skewering props and the ever-enlarging Audreys II. Never has this show had a greener thumb!"

"...Playing most of the show over-the-top with a fine trio of Greek Style chorus (Jasondra Johnson, Camille Robinson and Eunice Woods sing R & B) with the antics of shop owner Mr. Mushnik (the funny Mark David Kaplan) adding humor and heart, this Little Shop Of Horrors delivers. The intimacy of the stage at the Greenhouse Theater and the terrific sound mix by Rick Sims makes this production a technical triumph. It is so often that a rock-based musical overwhelms both singers and audiences, yet here both singers and audiences get to feast. Lovers of Little Shop Of Horrors will embrace this winner."

"...The odds are good that you've experienced Little Shop of Horrors before in some form. It could be a community theatre production with glorified green sock puppets like the kind featured on the website Low Budget Audrey IIs, a more professional-grade take, or possibly the 1986 feature film. At this point, it's one of the more iconic American musicals, having been performed and parodied across the pop-cultural landscape. Several of its songs have made their way into the Great American Musical Theatre Songbook. Any company that decides to take it on these days has a lot of expectations, both good and bad, to handle. Happily, American Blues Theater's production overcomes whatever prior experience you might have to be a solid trip to the theatre on a lovely spring evening."

"...The ensemble for this production is powerful, with Ian Paul Custer back as Orin, the Dentist, who romances Audrey with bullying (Custer just wowed audiences with his performance in Bad Jews, now, he is a bad dentist),Yando Lopez (playing several roles), Darian Tene (likewise), Lorenzo Rush Jr. (playing the voice of Audrey II) and the female chorus of Eunice Woods, Camille Robinson and Jasondra Johnson (they are stupendous!!!)."

"...But what truly distinguishes this "Horrors" is its music, which is the best sounding version this reviewer has ever heard. The Skid Row street urchins (Camille Robinson, Jasondra Johnson and Eunice Woods), who doo-wop and shimmy-shimmy their way through the narration, create a kind of pop urban opera, and it's magnificent."

"...Its been quite a while since Chicago enjoyed a production of Menken and Ashmans captivating, clever, musical science fiction satire. It was worth the wait. This exciting, creatively directed production is exceptional. It features some of Chicagos finest talent performing at the top of their game. In addition to an entertaining script and a musical score thats unforgettable, this musical will leave audiences with four words of warning: Dont Feed the Plant!"

"...Berry has not provided a new conception of this musical, but he has re-conceived it nonetheless. Following the hit movie version of this musical and its large scale 2003 Broadway production, he's returned it to an off-Broadway sized scale as it was originally conceived. Little Shop of Horrors is a reliably fun vehicle and Berry's production performs it with the skill and care it deserves."