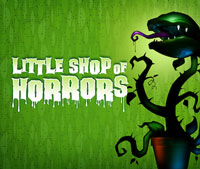 "...All in all, it's an admirable effort, one Sunday's audience clearly appreciated. Director Enrico Spada's spunky cast includes some impressive performers. Overall, however, the production lacks the bite this darkly comic show demands. Moreover some performances, as evidenced by the occasional wavering pitch, feel tentative. One might chalk that up to unusual circumstances and an unfamiliar space, which may be resolved as the run progresses and the ensemble's confidence grows. That said, Spada's ably staged production, choreographed by Breon Arzell (who also plays the murderous Audrey II) is a pleasant diversion that includes several performers who bear watching."

"...I was very impressed by this cast, playing outdoors ( so to speak) and working with no on-sire musicians. The music was recorded and this cast never misseda cue or not. Not easy and when Arlington Heights Road traffic and a city parking garage are right there, even harder. They did it!"

"...Critical in this reviewer's thought-process about this particular show is the need for two specific songs to be sung extraordinarily well for the production to have merit-the first act's Audrey ballad, "Somewhere That's Green," and act two's Audrey/Seymour duet, "Suddenly Seymour." Indeed, the lovely Emilie Rose Danno as Audrey and Mark Yacullo as Seymour absolutely deliver, shining in these roles throughout the entire production. Michael Metcalf adds his unique talents in multiple roles, including that of the sadistic Orin Scrivello, D.D.S., and Khyel S. Roberson is an endearing putz of a Mushnik."